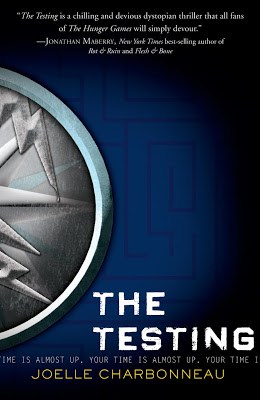 After the Seven Stages of War all but destroyed the world, the leaders of the former United States, now the United Commonwealth, are now selected through a complicated secret process known as The Testing. 16-year-old Malencia Vale (Cia) is hopeful on her graduation day that she will be selected for the secret program even though no one from the Five Lakes Colony has been selected in ten years. Just as Cia’s biggest dream comes true and she is selected for The Testing, she finds out that it might be her biggest nightmare as well.

The Testing by Joelle Charbonneau is new upcoming dsytopian novel about a new government who selects their leaders but unconventional and brutal methods. This series is going to be immediately compared to the Hunger Games because they are both the same genre with a more violent element than other similar books. The comparisons don’t bother me and actually weren’t something I thought about until I was finished reading the book because I was so enthralled with the story. While some of the bare bones of the story are going to be the same because they are in the same genre, the stories differ greatly in content. I do think people who love the Hunger Games will love this book and people who were wary of the Hunger Games will still love this book.

I really liked the main characters, Cia is likable, resourceful but also very caring and trusting. Despite warnings to trust no one. Tomas, the other testing candidate Cia chooses to ally herself with, is resourceful, untrusting, with a secret. The premise of the book was compelling and gripping. I could hardly put the book down. The book really builds on itself, . The actual testing on the candidates is broken down into four sections with the stakes climbing in each test from elimination to death.

The Testing is the first book in the series and I loved the way she chose to flow into the next book. I will definitely read the rest of the books as they come out.

You can pre-order The Testing here. It will be available on June 4th.

(I was given a copy of the book in exchange for my honest review. All opinions are my own.)