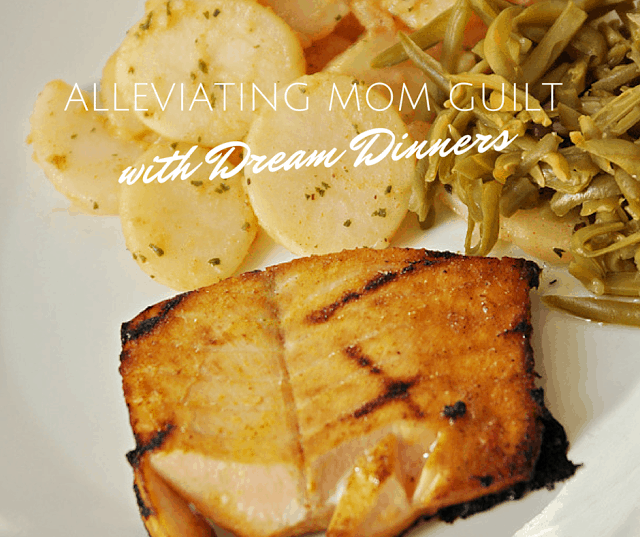 Do you ever feel overwhelmed by Mom Guilt? I do. It seems there is a never ending list of things we are not doing that we are supposed to be doing as moms.

As someone who loves to cook, I’ll be the first to admit it can be hard on those days when you don’t have time to cook. Every mom has those days where other things come before dinner. We aren’t a cold cereal kind of family. If we don’t cook, we go out to eat. Sometimes it is a double whammy of mom guilt. I didn’t cook AND we spent money on eating out. (Hang my head in shame….)

This summer, I have been invited to try a Dream Dinners Experiment. In which my family will incorporate Dream Dinners into our every day life, and I am so excited to take the chance. Dream Dinners are meals you prepare in bulk yourself at their facility and then freeze. You select the meals you want to make online before you go, when you arrive at Dream Dinners, you assemble your dinners for your family. You take them home and freeze them and then pull them out as needed. Some meals have to be taken out the night before and some can be put in the oven straight from the freezer.

I have tried to do freezer meals before and it was a total disaster. I was part of a freezer meal group where we each make seven copies of the same dinner and then switched with all of the other ladies. While it made some things easier, I didn’t know what was going into each meal, and with allergies in our house it made me so nervous that we stopped after a couple of times.

My husband is also a huge clean freak and it stressed him out to not know how clean the other people’s houses were. When I introduced him to Dream Dinners he brought up those same stresses. He was wary, but when I saw how separated the food was at Dream Dinners, I felt comfortable preparing my dinners.

All of the dinners are kept separate from each other so I wasn’t worried about my meals becoming contaminated with another. I prepared each meal myself, so I know exactly what is in each meal and I feel confident about my family eating it. Dream Dinners is kept very clean and everything is sanitary in separate bags. 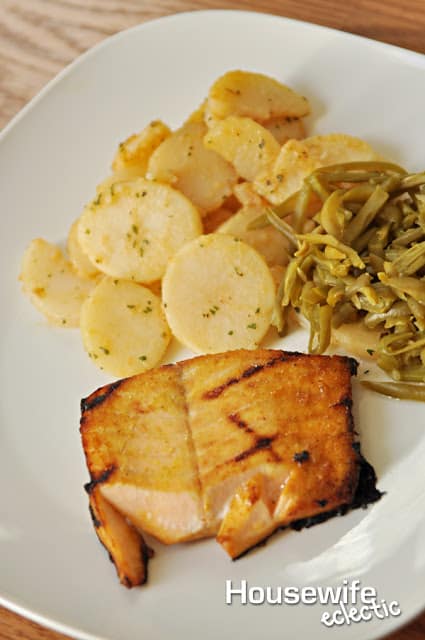 We tried three Dream Dinners meals out of our own pocket for our family of four, just to see what it was all about. We have been really pleased with the dinners so far. My husband loved the salmon, and the bacon pasta is a dish I want to eat again. The staff was so helpful when I assembled my dinners, they made sure I knew just what to do and answered any questions I had.

When we made the salmon, we also threw together our own side dish. It is family favorite and one you can whip up in five minutes or less. It goes great with so many meals. and was PERFECT with the Dream Dinners salmon. 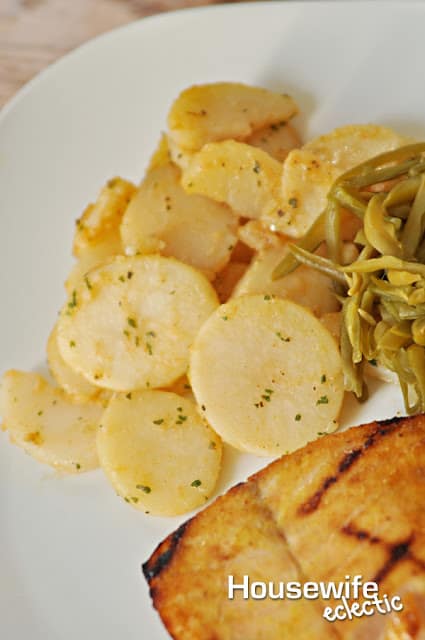 Melt the butter in a large pan until frothy. Add the potatoes. Stir in all of the spices, adding more or less to your personal tastes. Keep over medium heat, stirring occasionally until the potatoes start to fall apart around the edges, about five minutes. Serve with the Dream Dinners Salmon.

I am so excited to start this Dream Dinner experiment — no more mom guilt on nights I don’t have time to cook, and no more eating out two times a week because it is more convenient. Finally, home cooked meals are going to be the most convenient thing for our family.