This shop has been compensated by Collective Bias, Inc. and its advertiser, Walmart Family Mobile. All opinions are mine alone. #AngryForSavings #CollectiveBias 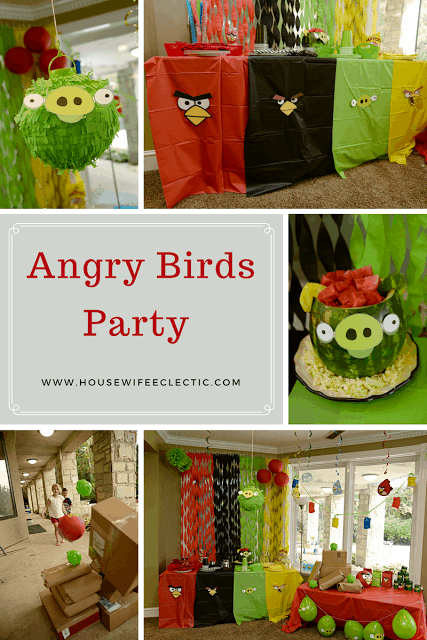 My kids have been obsessed with Angry Birds pretty much since the beginning. It was the first game I downloaded when I bought my first smartphone and I can’t even count the number of times we have played it. When my daughter was four, I threw her first Angry Birds Birthday party. Believe it or not, this is our third one. Told you, we love Angry Birds.

For this party, I had my husband create a set of Angry Bird Face printables in a couple of different sizes, which makes it really easy to turn just about anything into an Angry Bird. It saved a lot of time with this party and helped everything turn out just the way I wanted it too. You can download the faces at the end of this post, to help make your party a breeze too! 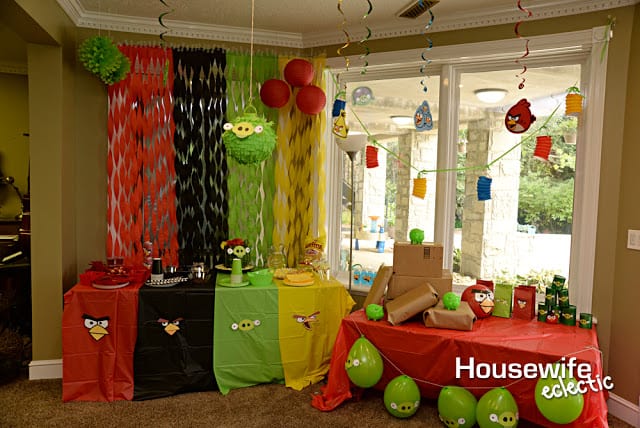 My favorite part of this party is the food table, playing off the main players in the movie: The Red Angry Bird, the Black Angry Bird, the Yellow Angry Bird and the Green Pig. Since we were planning a dinner time party, I didn’t just want to have snacks on the food table, so I added all of the fixings for a taco bar as well. It was great to have a good dinner and some healthy snacks to go along with the sugar. 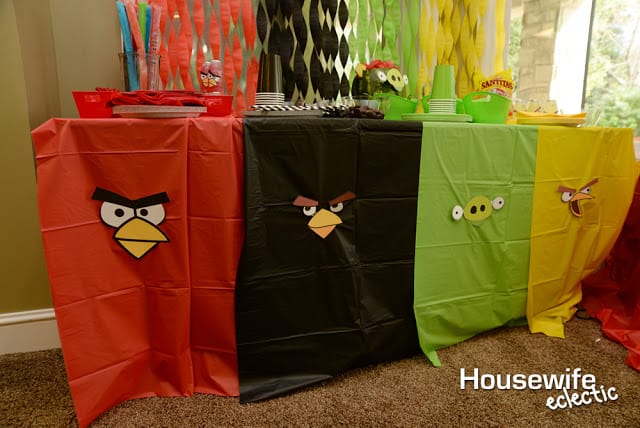 The food table is a long banquet table covered with tablecloths cut into for sections. I layered the plastic tablecloths on top of each other and taped a large printable face to the front of the tablecloths coordinating with each bird. 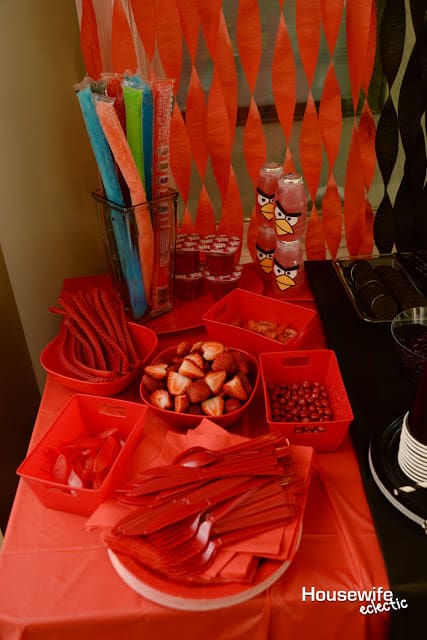 I expected black to be the hardest snack table to fill, but it absolutely wasn’t that way at all. For the taco bar there were black beans and olives. For treats there were Peppermint Patties, Oreos, black licorice and cupcakes. There were also black plates, cups and straws. 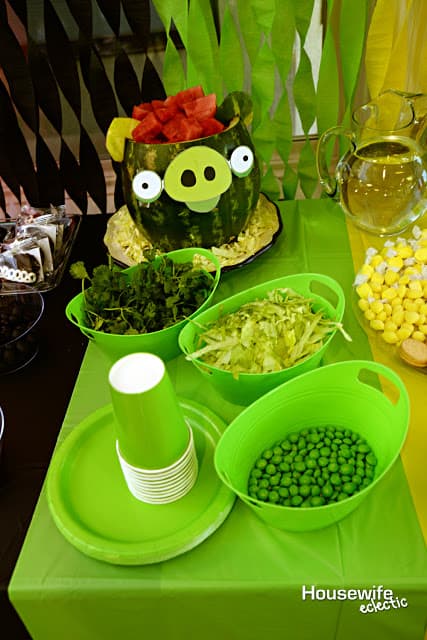 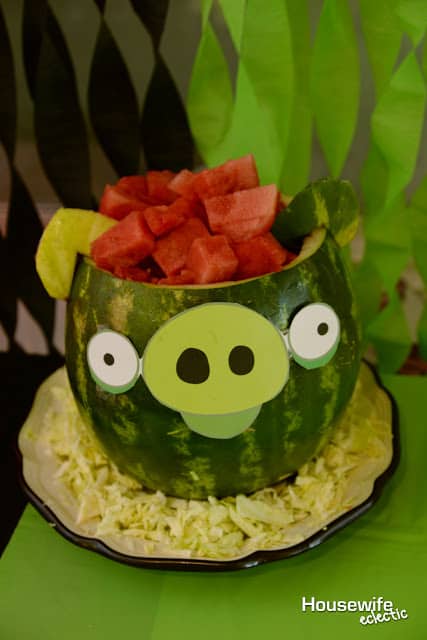 The cutest part of the food table by far is the Pig watermelon, made by cutting the top off the watermelon and carving out the inside. After the watermelon is cut into chunks, it is put back into the watermelon and then ears are created out of small pieces of rind, and a printable face is taped on. The green table featured green cups and plates as well as lettuce and cilantro for the tacos. 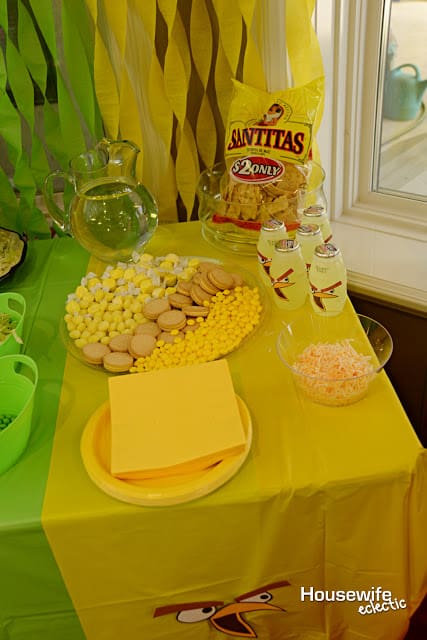 The yellow table consists of small lemonades with Angry Bird faces taped on, cheese and tortilla chips for the tacos, and a snack platter with Golden Oreos, Lemon Heads, taffy and Skittles. 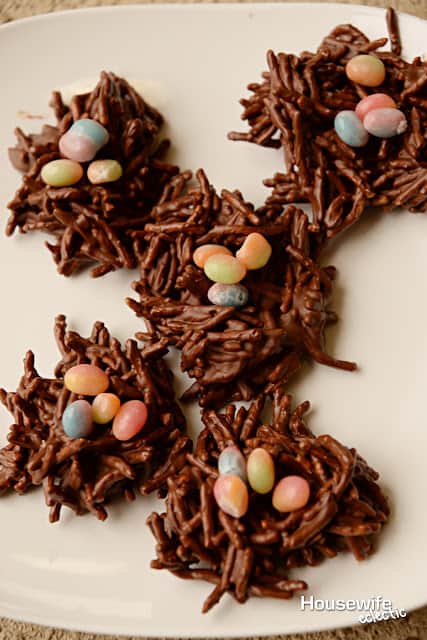 The finishing touch on the snack table were these darling chocolate nests full of eggs, because it wouldn’t be an Angry Birds party if there weren’t eggs for the pigs to steal! 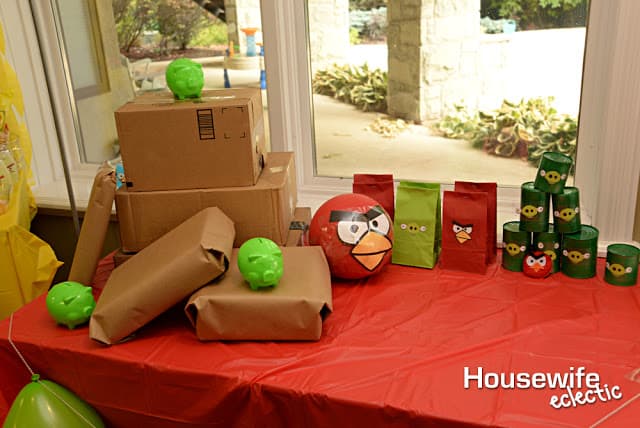 With every Angry Birds party we have thrown, the kids’ favorite part of the party is playing a real live version of Angry Birds. I collected old shipping boxes for a little while before the party, so we would have a nice selection of different sized boxes. I found green pig banks at the dollar store and they were perfect for stacking in the boxes. I taped a large Angry Bird face on a red playground ball to be the Angry Bird. 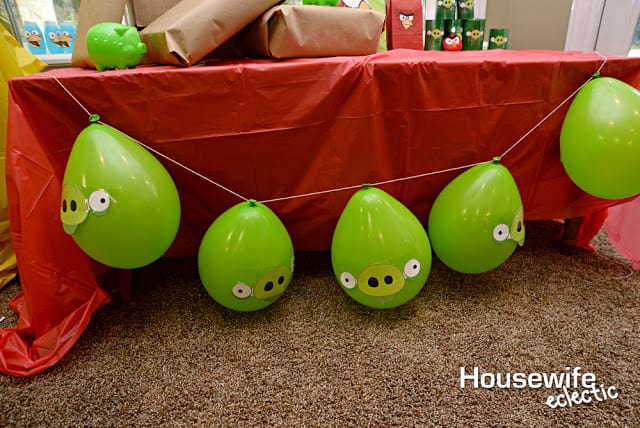 This pig banner is created with green balloons, printable face, and surprisingly enough, a needle and thread. Just make sure when you thread your banner that you place the needle through the tied off part of the balloon or, of course, you will pop it. 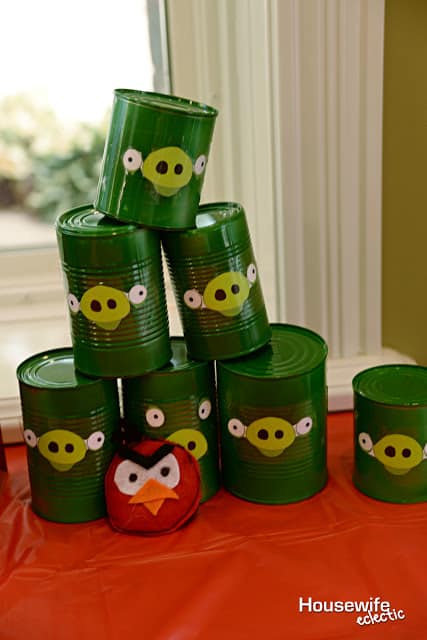 I actually made two different kinds of Angry Bird toss games. I made this version out of tin cans, green spray paint and small printable pig faces. This smaller tin can game is perfect for smaller spaces or for smaller kids. Since our party was going to be attended by both older kids and toddlers, I made the little ones their own version with a cute little handmade bean bag to go with it. 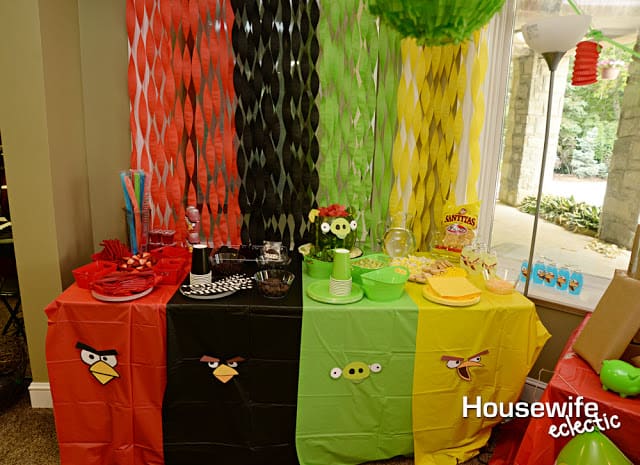 The thing that took the most time was the backdrop for the snack table. Cut strips of crepe paper that are long enough to cover the back of your table. Tape one end at the top of the wall and then twist each strip 3-4 times and tape it down at the bottom too. 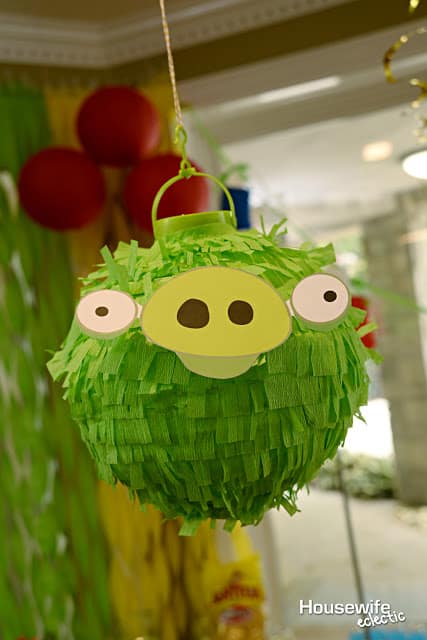 After making countless piñatas with lots of messy papier-mâché, I have finally found a better way. Start with a paper lantern base and add layers of crepe paper with school glue. Cut fringe into strands of crepe paper, then glue it into layers around the paper lantern. The lantern gives the piñata enough structure without making it so sturdy that it won’t break. 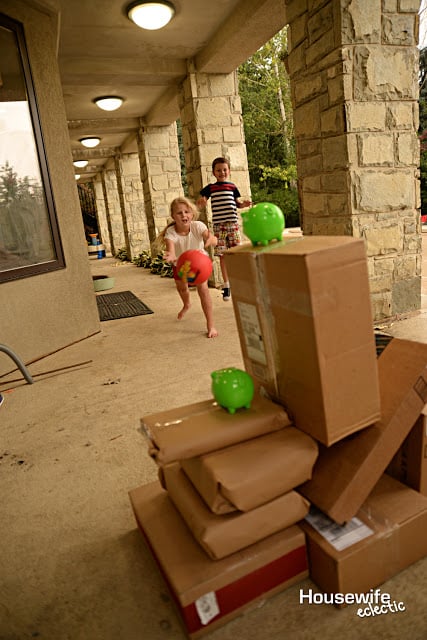 The kids loved playing “real” Angry Birds in the backyard. It ended up raining during our party so they had to play under the porch, but the kids still had a blast. It was fun to have boxes of all different sizes to make different structures. 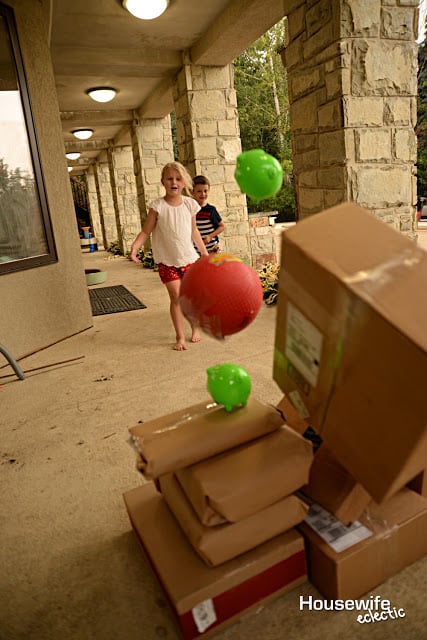 The dads were in charge of building the boxes back up again and they came up with some pretty creative configurations. As much fun as it was to knock over the boxes, I think the little plastic pig banks added the perfect touch. 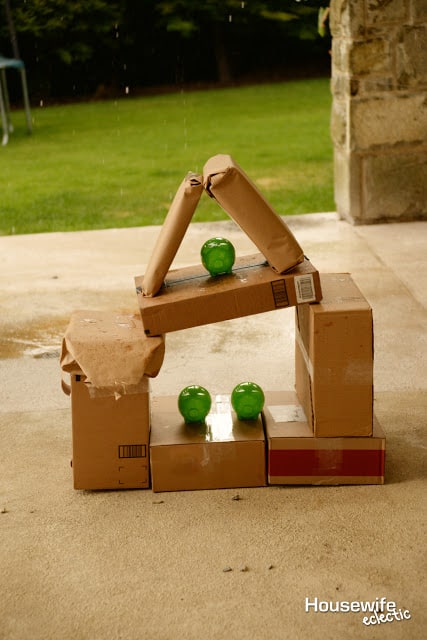 The piñata was a huge hit (pun intended). The kids used a large wooden dowel and it would have been nice to have something a little bit bigger, but in the end it worked just fine. 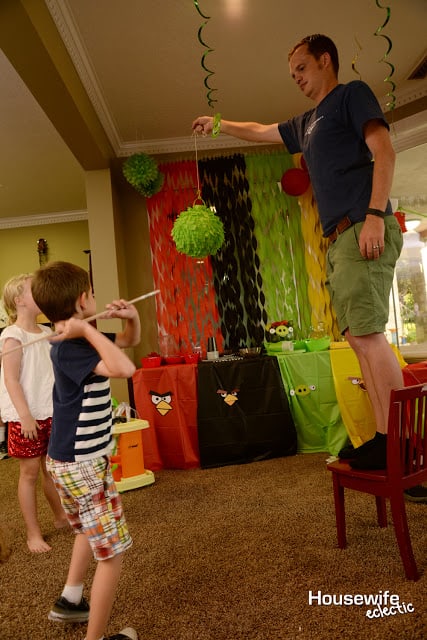 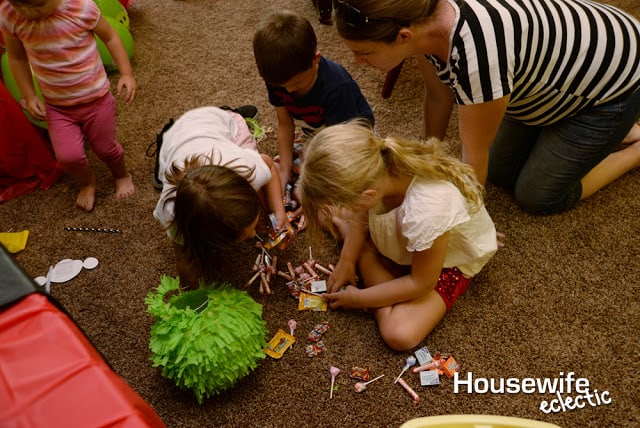 I printed out extra large Angry Birds printables and the kids made their own Angry Bird masks using the printables, foam masks and glue. They loved having a photo booth to take pictures of their creations. 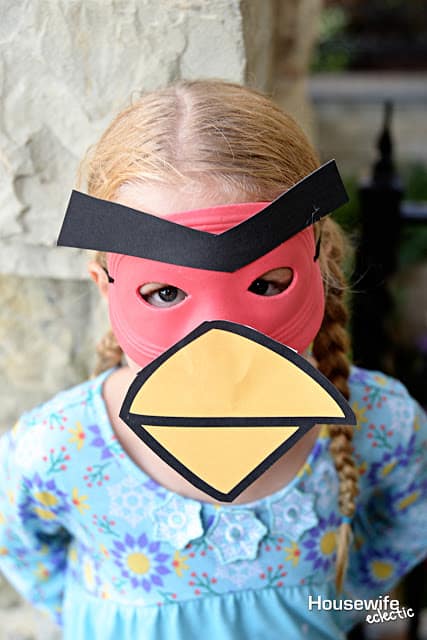 The best part of any party based around a movie is of course, watching the movie. With Walmart Family Mobile you get a free VUDU movie each month so you can keep having movie nights! 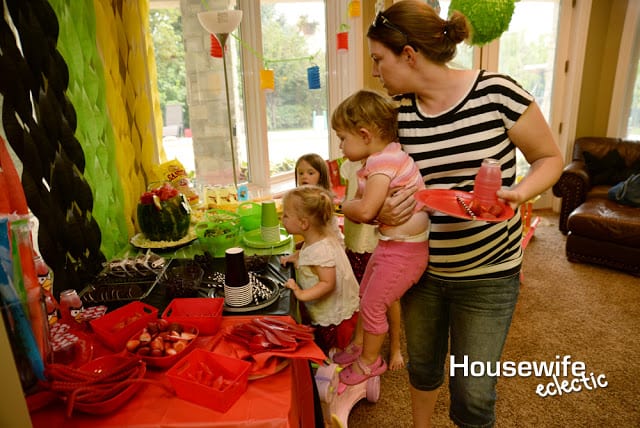 We have used Walmart Family Mobile on and off through the years and I have always been impressed by the quality of service and most of all, their fantastic customer service. They have always helped answer my questions and done anything they can to help. We live in an area of our city with sometimes spotty cell coverage and Walmart Family Mobile is one of the only providers that we don’t have any problems with. It is nice to have a service that is reliable and easy to use.

I just picked up the Coolpad Catalyst as a phone for a teenage sibling and it works great! It has all the features she wants with the price tag ($59.88) that a parent wants for sure. 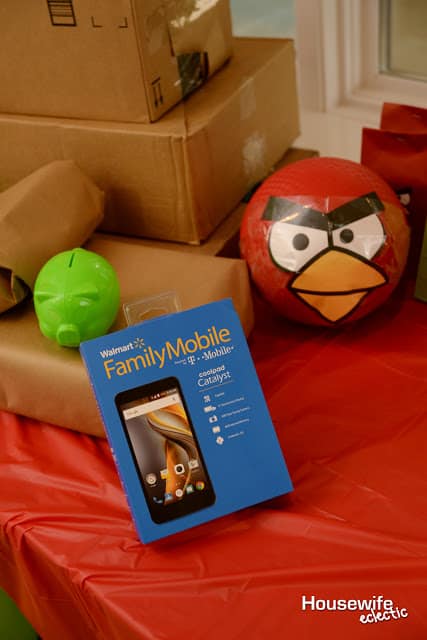 Right now, in Walmart Stores, you can scan the Angry Birds Display to unlock a Selfie Augmented Reality Experience with the Hatchlings, and while you are there check out the selection of phones from Walmart Family Mobile. The Starter Kit needed for each phone is on rollback right now too. Since Family Mobile bills you later, you only have to pay $19.88 when you sign up. After you get started, you can sign up for the Walmart Family Mobile PLUS Plan = Unlimited Talk, Text, & Data which includes up to 10GB of 4G LTE plus a free movie on VUDU every month ($7 value) per line for $49.88. That is like having a free family movie night each month! We love to cast our movie to our TV using our Chromecast and enjoy it all together. The best part of the Walmart Family Mobile PLUS Plan? Not having to worry about your teenager going over data because they have tons of it! 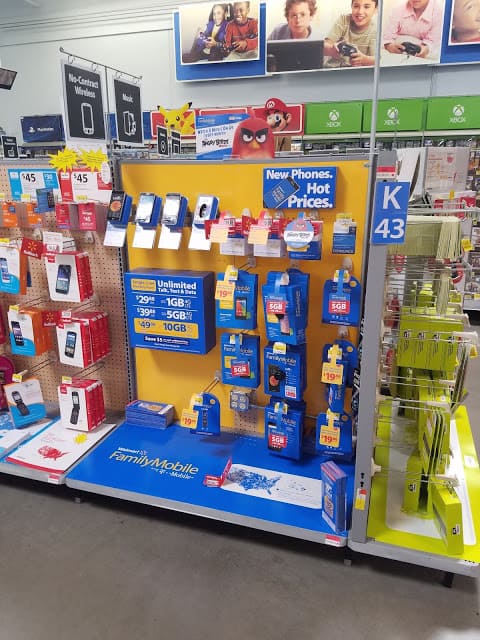 You can also visit your local Walmart during a Walmart Family Mobile Event and speak to a Walmart Family Mobile Rep. The event will even have a code you can scan for a free power up for the Endless Runner Game on the Angry Birds Action! App. Go here to find an event!
All prices for phones and plans included in this post are accurate as of the date of posting; however, these prices are subject to change. Please refer to http://cbi.as/4q-u1 or your local Walmart for current pricing. 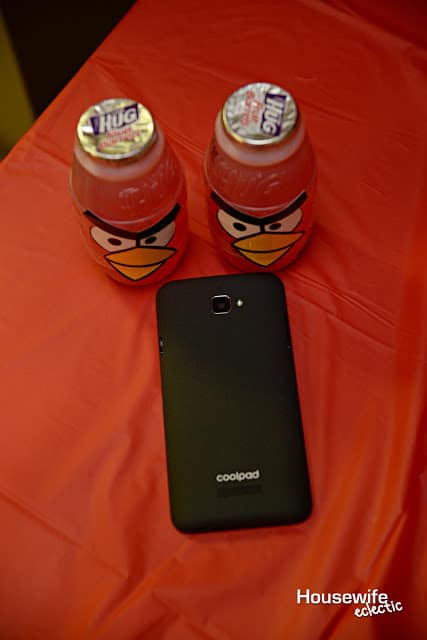