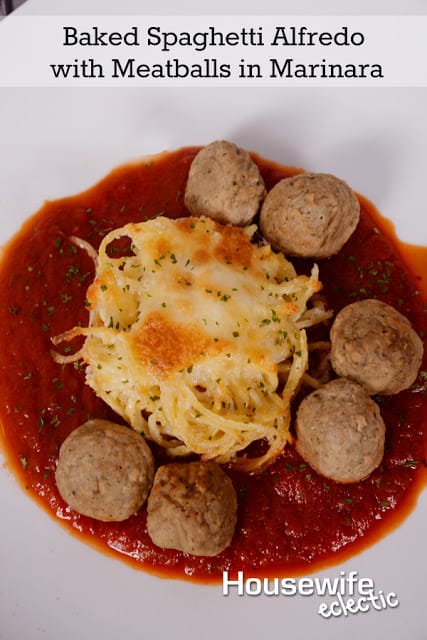 If it were up to my daughter we would have spaghetti every night. Now, there’s nothing inherently wrong with spaghetti. Except that it’s kind of boring. Adding meatballs helps, but it’s still just an ultra basic dish.

I’m more of an Alfredo fan. It’s rich, creamy and so satisfying. But if I make Alfredo, my daughter won’t eat it. Tired of battling out who gets their sauce of choice, I’ve found a solution: Baked Spaghetti Alfredo with Meatballs in Marinara.

This meal is really two meals in one. You prepare the spaghetti Alfredo, and then prepare the meatballs and marinara.

This meal definitely takes some timing and preparation, but it’s worth it. The baked spaghetti Alfredo is rich and full of texture since it has been baked and crisps up a little. The Alfredo mingles with the bright marinara for an explosion of flavor. And the meatballs add some needed protein to balance everything out.
It’s a meal kids and adults can both agree should be made again.