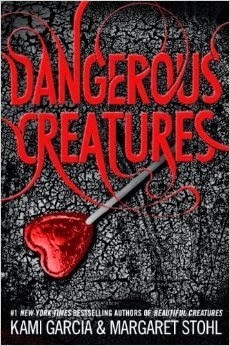 What would you bet if you knew you couldn’t lose? Ridley is so sure of her persuasion powers that she posses as a Dark Caster Siren, that she puts it all on the table in a game of cards. A game that she loses, now she owes someone even more powerful than herself anything he wants.

We are back in Gaitlin for the newest Beautiful Creatures book, but this time instead of following Lena and Ethan around, we are following Ridley and Link on Link’s journey to become a musician in the Big Apple. Ridley has found Link a band, but what she doesn’t tell him is that she using him to pay her gambling debts.

Overall, I really enjoyed this book. Ridley was my absolute favorite part of the Beautiful Creatures series, so I was thrilled to see a spin-off starring her. I loved getting in her head, even with hearing her insecurities and such, I felt her character stayed really true to what she was in the first series. Link was his fun, odd ball self. My only character problems came with one of the other main characters who seemed to flip his entire personality, and stance on life for no reason at all.

I felt like the pacing on this book was a little off. It took forever to get into and then the last thirty percent of the book absolutely flew by. Even though the middle was a little slow it was a fun read, that anybody who liked the Beautiful Creatures series would enjoy, especially if there was a small part of you who was always cheering for Ridley in you head.