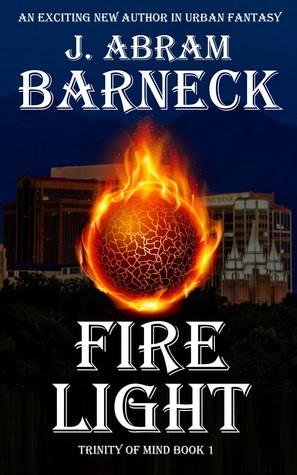 Fire Light is the debut novel of J.Abram Barneck, you can purchase the Kindle version of this book here.
Jake seems like a pretty typical kid. Part jock, part geek who hopes to escape his crummy home life and home town by getting a football scholarship. Although he seems typical, Jake feels different. He doesn’t get sore from working out and he often gets the feeling that he is being watched. His normal life falls apart when he becomes the target of plan to annihilate all  Druids, a magic society he didn’t even know existed, let alone he belonged too.
Fire Light was honestly a pretty slow starter for me. It took quite a few chapters to get into, but I really liked the story line after it got moving. I have read a lot of fantasy type books, but I had never read any with quite the same twist on them. It was a new take with some classic type characters including some vampires. I loved  how the vampires he that were included in the story were more characteristically like typical vampires than most recent stories.
I really liked the main character, Jake. I felt he was a pretty upstanding guy, but not too adult with typical teenage flaws, such as acting without thinking. He was a pretty over protective guy, especially of his sister, but I felt like that was in line with how close he and his sister were in the book. It was refreshing to read a book with a male lead character for a change, most of the books I read tend to have female leads. I liked hearing the story from the male perspective, but I was a little disappointed that there was a love triangle. It seems like every story has a love triangle now a days and I was hoping for a break from them. I did think the author brought a unique twist to this particular love triangle, that makes it more interesting than most, but maybe more heart breaking as well.
For the most part I enjoyed Fire Light, but there were a few things I didn’t love. The constant use of the work Jeek (combination of jock and geek) got old pretty quick.  I surprisingly didn’t love the setting. Fire Light is set in Utah, where I grew up and currently live. The author was pretty specific in his use of cities, locations and streets, which didn’t flow well with me. I might be just because I am so familiar with the places he was using. It makes me wonder if I lived in NYC if I wouldn’t love books being set there.  The use of many references to music groups and TV shows didn’t exactly bother me, but I was glad I was reading the book when it was new and not years down the road when I might not have recognized some of the references.
Overall Fire Light was a pretty fun read, it is very clean, no swearing, limited kissing. I would recommend it to all teenagers and young adults who like fantasy.