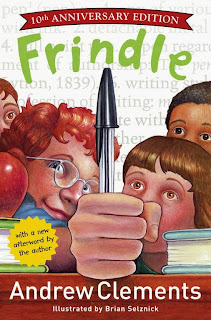 After saying I was going to get around to reading this book for almost three years, I finally got around to it. All I have to say is, it is easily on my favorites list.

Frindle is clever and fun. It screams creativity and kid power. The main character of Frindle is what I always wanted to be as a child. I wanted the guts to change the world like he does. Even though the way he changes the world is simple, it has a lasting effect.

The main character of the book makes up a new word for pen, Frindle. He decides that all words were just arbitrarily made up by someone anyway so he should be able to make up his own word. He goes through many clever steps to get people to use his new word and it is eventually covered by the news making it a phenomenon.

This book is fun and easy to read. It is a relatively short read but for being so short it sure captivates the reader. You are cheering for this creative child the whole time, hoping his word catches on and secretly wanting to call pens nothing but frindles for the rest of your life.

If you haven’t read this, read it, now. You won’t be sorry.