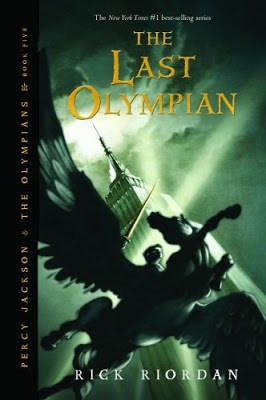 Percy Jackson and the Last Olympian is easily the best book in the series. If I was starting over, I would read the first four books just to get to the last book and the final battle.

In this last book of the series, Rick Riordan wraps up the questions that have been lurking over the course of the last four books. You see all of the Gods in this book as the fight the impending evil elsewhere in the world leaving only Demi Gods to defend Olympus. You get to see some of the most famous places in mythology including the River Styx and spend a great deal of time on Olympus. Many of the minor Gods that have been glossed over in the previous books were more prominent in this book.

This book is also the first book where the romance between Annabeth and Percy finally comes to light and more than a romantically charged friendship. Rachel Dare, the mortal who can for some reason see through the mist plays a huge role in this last book, which I loved. It was nice to see a complete mortal have such an important role in the world of the Gods.

The very last part of the final battle was a bit of surprise to me. As most of the parts were slightly predictable as some fantasy ends up being, the very final moment of the battle was a bit of a surprise to me, which I loved. This book is much darker than the previous books and did not have as many really funny moments but since I love when stories wrap up, this was definitely my favorite.

Some of my main complaints about this book and the series? Percy Jackson is one of the least interesting characters in his own series. I find the mythology behind the Gods and the monsters much more fascinating than the story behind Percy himself. In a lot of ways, I didn’t feel like Percy had matured a lot through the series. He still seemed to act like a tweener in many senses

Overall, a pretty good book in a good series. I recommend this series to kids ages 10-14 and everyone else who likes a good fantasy/mythological story.