This is a review of the book my Rick Riordan not the newly released movie. 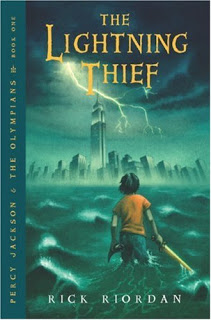 I wasn’t sure what to make of this book when I first heard of it. It seemed like a rip off of Harry Potter. People have been telling me to pick these up for ages and I had pretty much ignored them.

After we moved to South Texas, a friend of ours suggested them again and since I was in the market for a new book, I decided to pick it up. I am glad I did.

This book is the first in a series of 5. It follows a preteen boy named Perseus (Percy) Jackson from thinking he was just a regular kid with a horrible step dad to finding out he is the son of the sea god Poseidon. To see a demi-god in modern day was a clever concept that I have never seen before now.

The books takes Percy through his first quest to save the Gods from battle and the world from war. He is supposed to figure out who stole master lightening bolt from Zeus. It is a crazy whirlwind of a book. He sure accomplishes a lot in one book for a sixth grader but I guess he is no average sixth grader. The book did seem to treat him as older than he was. I kept forgetting he was so young but the movie previews could have had something to do with that.

Yes, there are some similar elements to Harry Potter, for instance the kids are divided into cabins at camp half blood, just like the wizards are divided into houses at Hogwarts. The similarities bothered me sometimes but then I shook them off and reminded myself that it didn’t matter if Percy Jackson had some similarities to Harry Potter because it was still a good book.

Percy Jackson provides a good introduction to Greek mythology. It does a pretty good job of providing the reader with enough information so you don’t have to keep leaving the book to look something up about mythology. I, however, love to know every detail so I was often looking up characters/gods from the book. It was fun to see the Greek Gods in a modern sense and see that at least according to Riordan that they are still up to their old tricks.

It is a pretty good book and I would recommend it to anyone who loves mythology, adventure books and something that isn’t too hard to read. Now I am off to read number 2.