This shop has been compensated by Collective Bias, Inc. and its advertiser. All opinions are mine alone. #BigGameSnacks #CollectiveBias 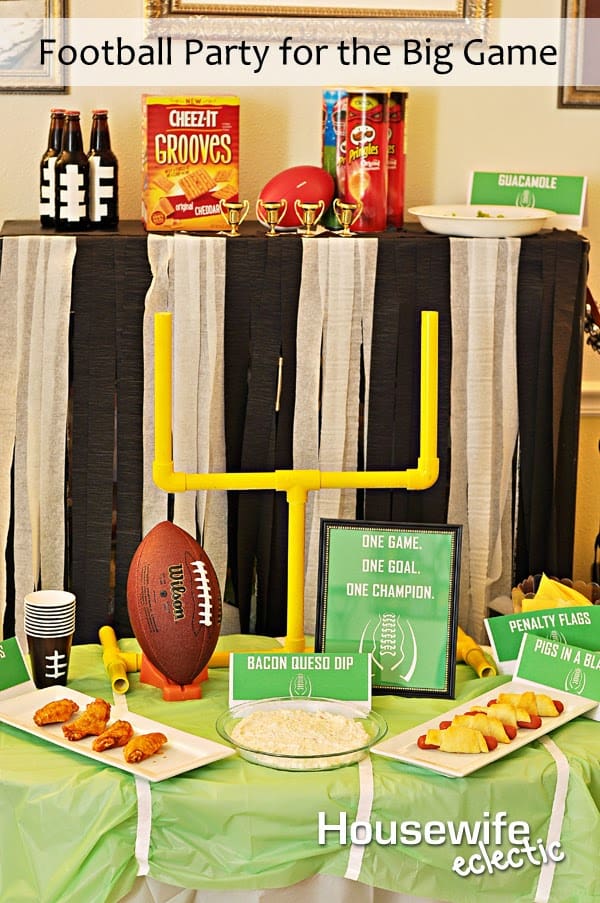 We are football crazy in this house. When my husband and I were first dating I loathed football. I couldn’t think of a worse way to spend a Saturday than at a football game. My husband, on the other hand, loves football, so we made a deal: we would go to a game together and when I could explain to him what was happening in the game we could leave and he would never make me go to another one.
I thought I had made the deal of a lifetime. No more football for me. As my then-boyfriend explained the game to me, I found I enjoyed it more and more as I understood the strategy. At about halftime he told me we could leave and I told him to be quiet because I was watching the game. We have been a football-loving family ever since.
Every year we get really excited for the big game and I go all out because what game would be complete without awesome food and friends? 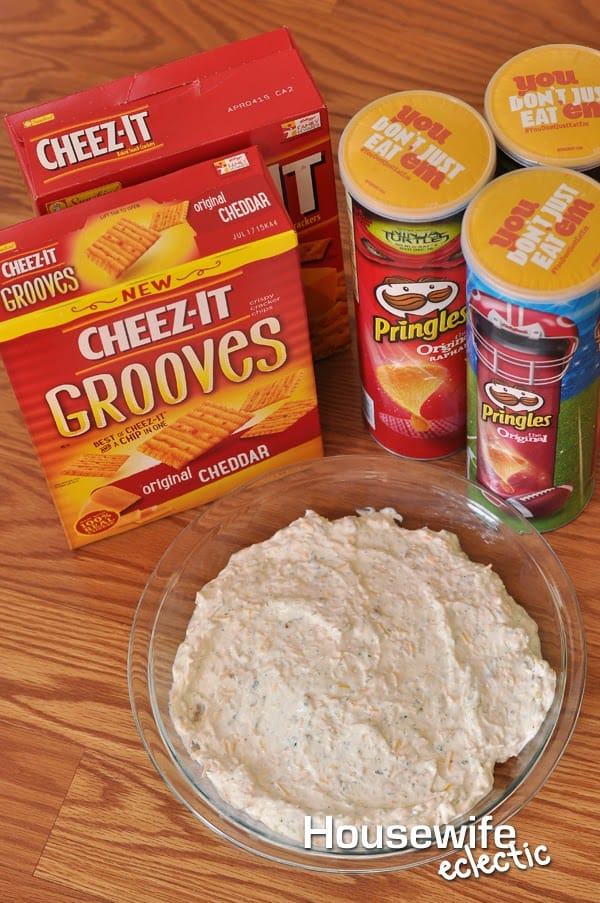 One of the first things I do for every game day party is create dips. You can buy a whole bunch of Pringles, Cheez-Its and other dipables and then just create a bunch of different flavors to dip them in. This Bacon Ranch Dip is one of my favorites. 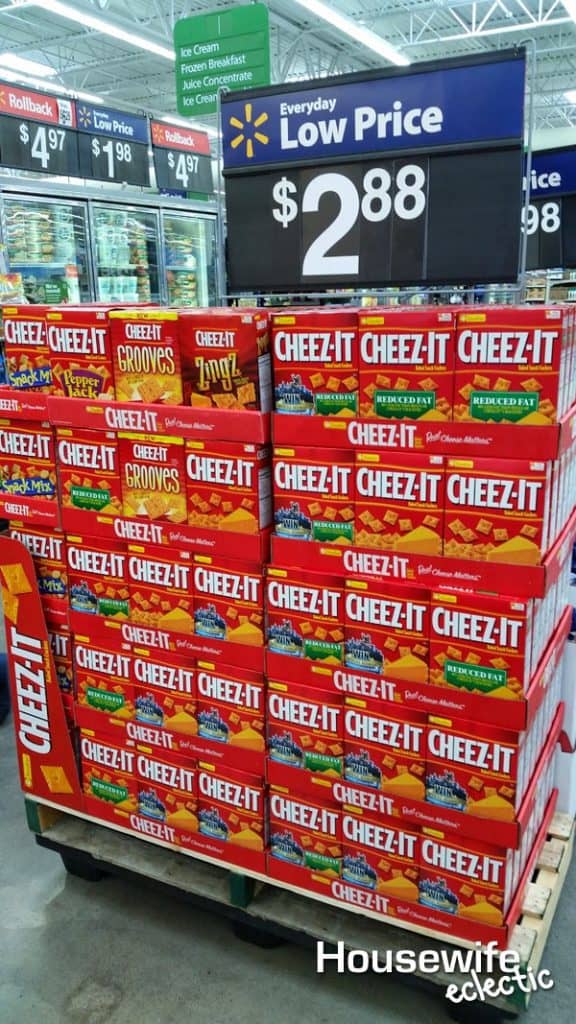 My husband is in love with the 100% Cheese Cheez-It Grooves I found at Walmart and I have found they hold up great for dipping! 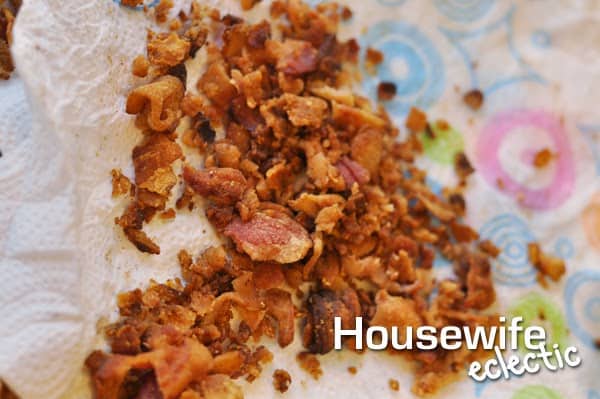 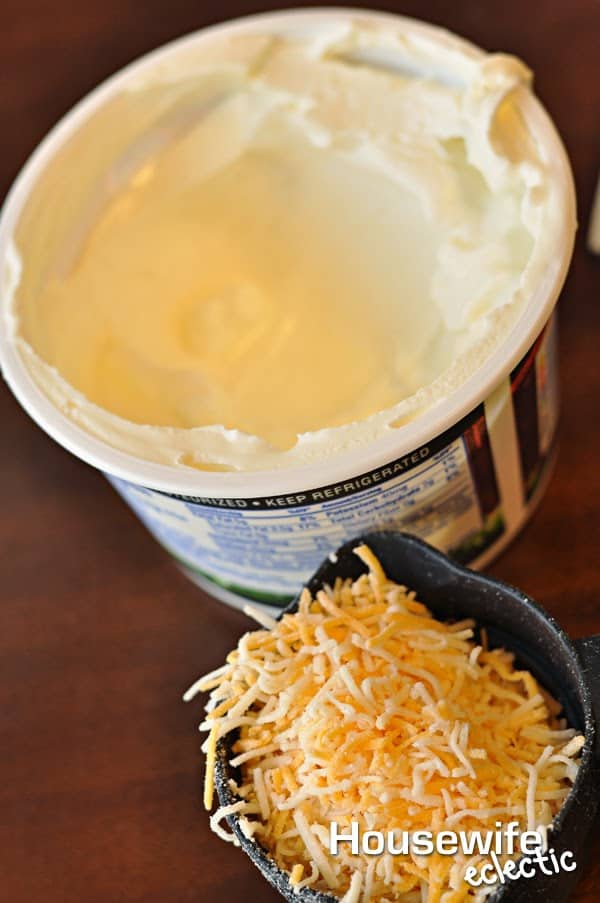 Mix the sour cream and ranch dip together in a bowl until well mixed. Add the cheese and bacon and mix until completely incorporated. Chill in the fridge 6-8 hours before serving. 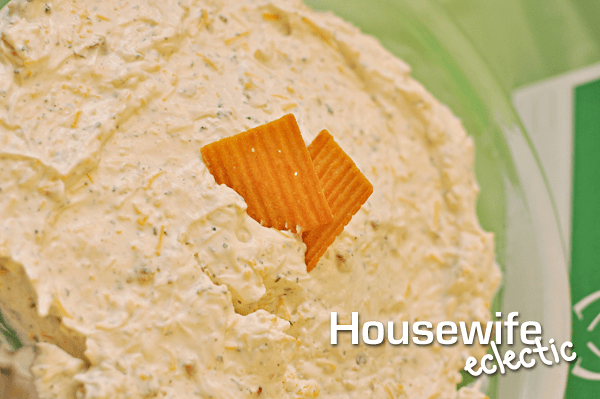 This cheesy fun dip is perfect for Pringles, veggies or even Cheez-its. It has an extra added zip that most dips don’t have. It is all about the bacon. 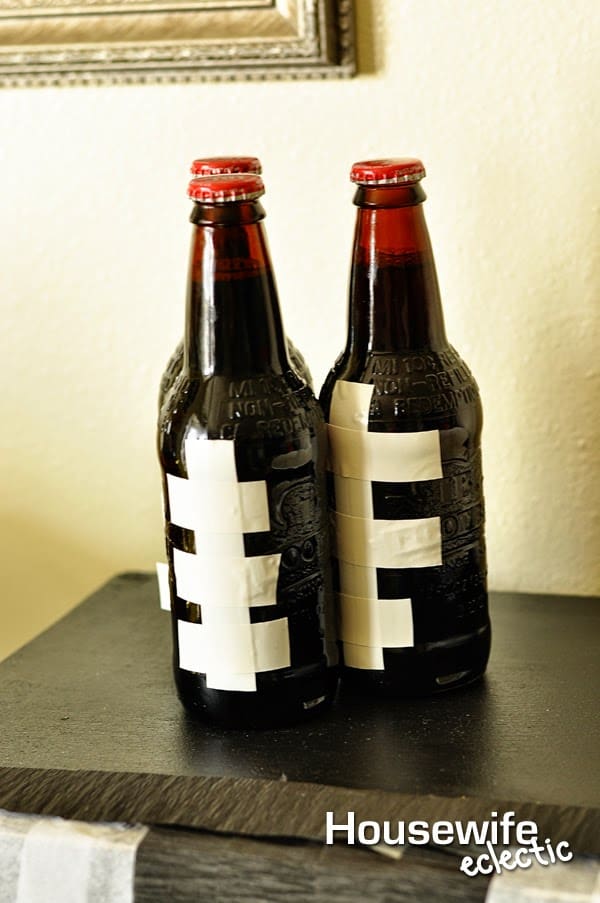 One of my favorite things about this particular party was the little football details, turning the brown root beer bottles into footballs with pieces of white electrical tape was easy and so much fun. 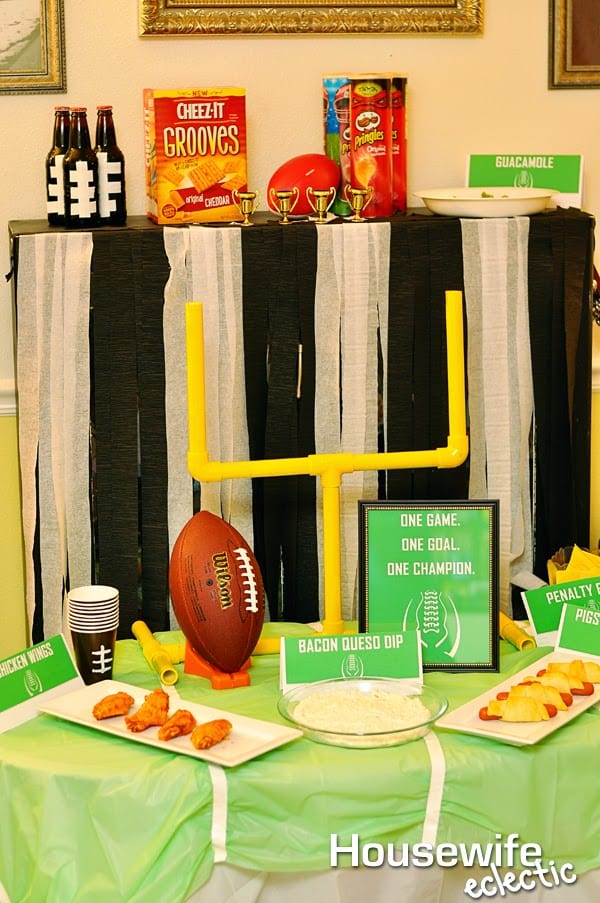 I also made the football field table cloth with white electrical tape. The football lines on the brown paper cups were made with white correction fluid. It was easy to paint on and dried super fast. I created the printables just for this party to label all of the food and I have to admit, my favorite printable is the one for the yellow napkins. Those darn penalty flags. You can download the printables at the end of the post. 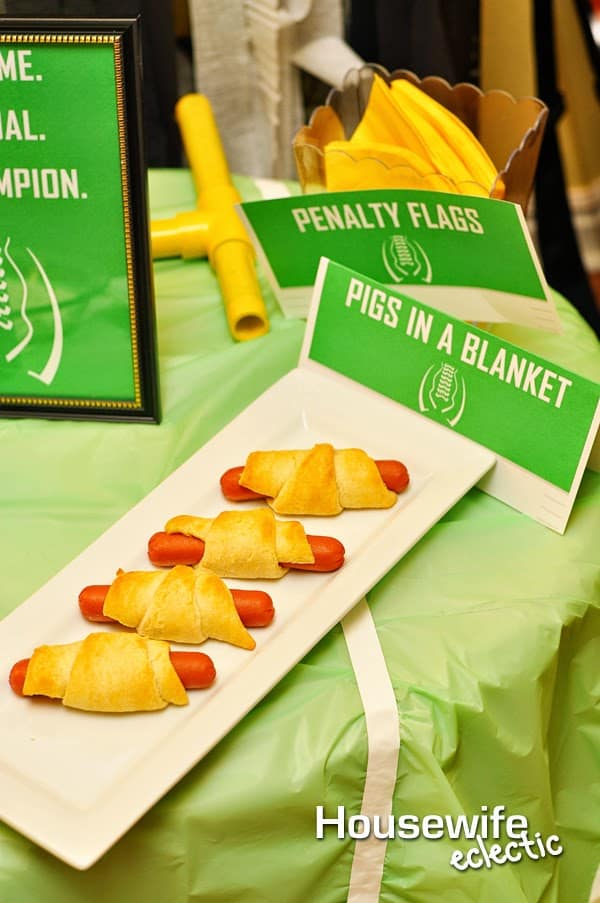 As for food, we stuck with the football classics: pigs in a blanket, hot wings, guacamole, bacon dip and of course lots and lots of chips! 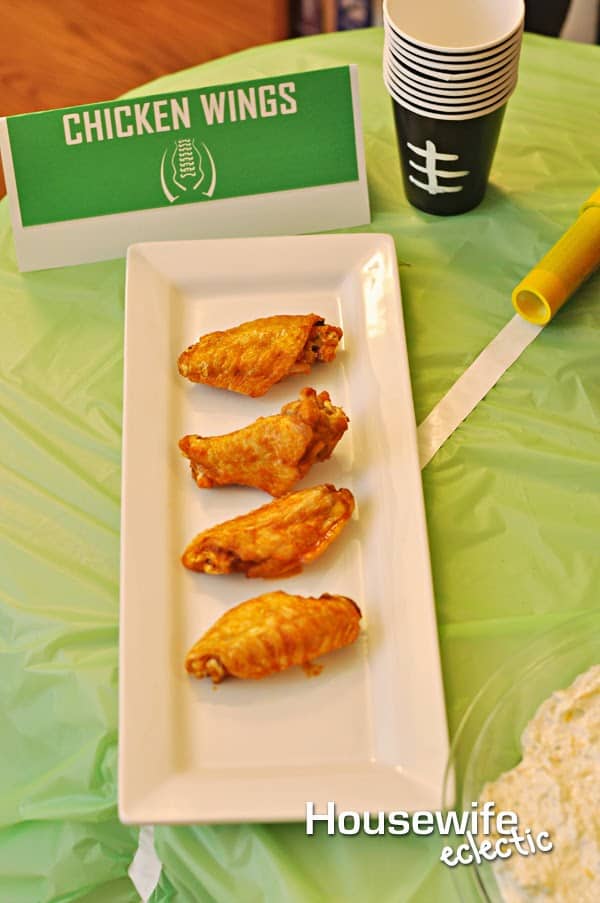 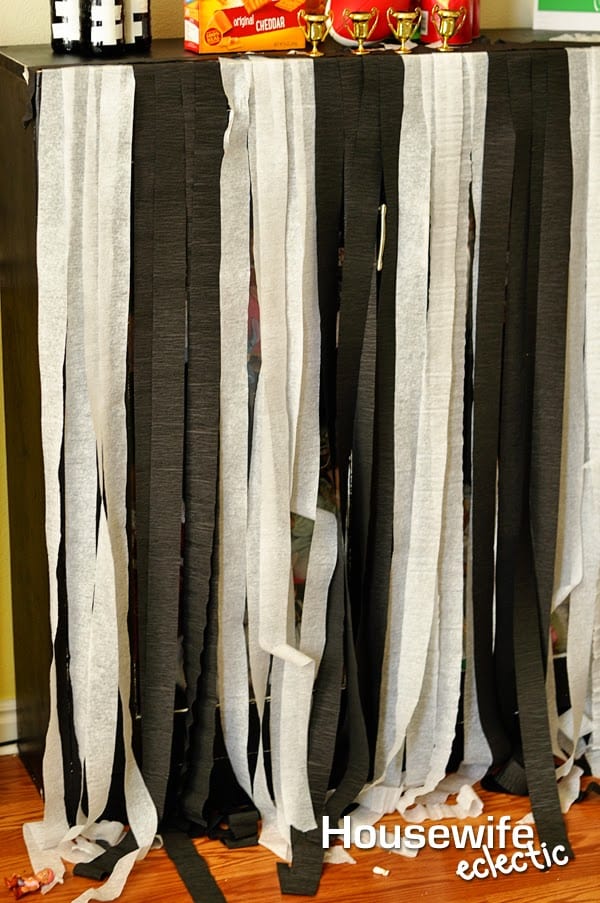 When I throw a party, I always love to have a photo booth. I feel like you get lots of pictures you wouldn’t normally have because people know they are supposed to take some. I made this easy backdrop out of black and white crepe paper, mimicking a referee uniform. 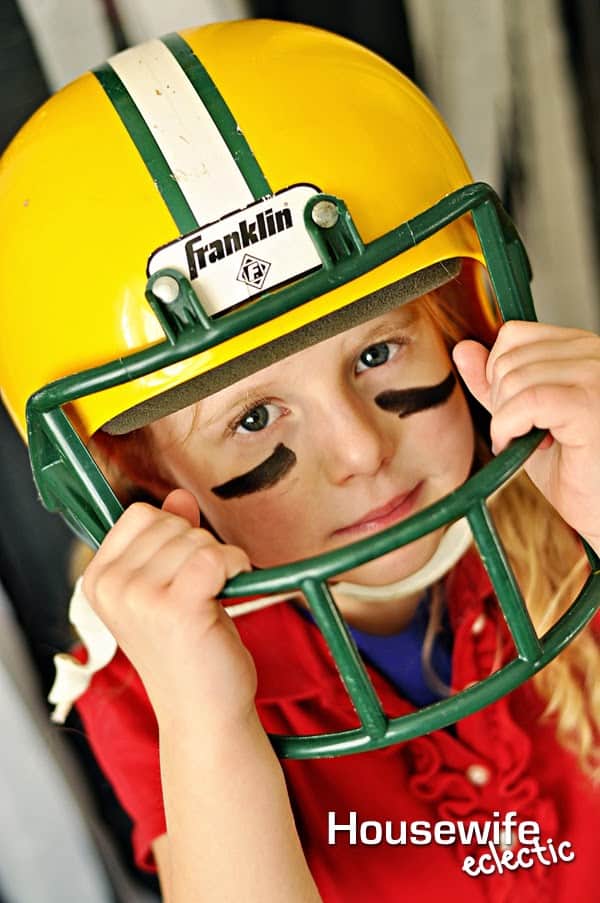 I had helmets and an eye black stick for people to put on for pictures if they wanted. 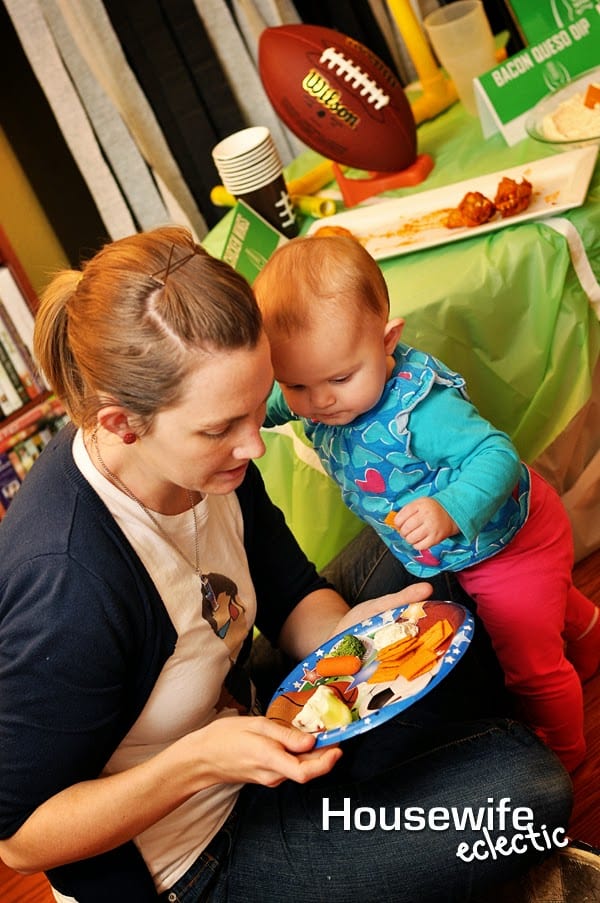 The football upright made out of PVC was the most time consuming of the party prep, but it was totally worth it. It doubled as decor and entertainment. The kids loved taking the upright down and playing football with it after we were done eating. 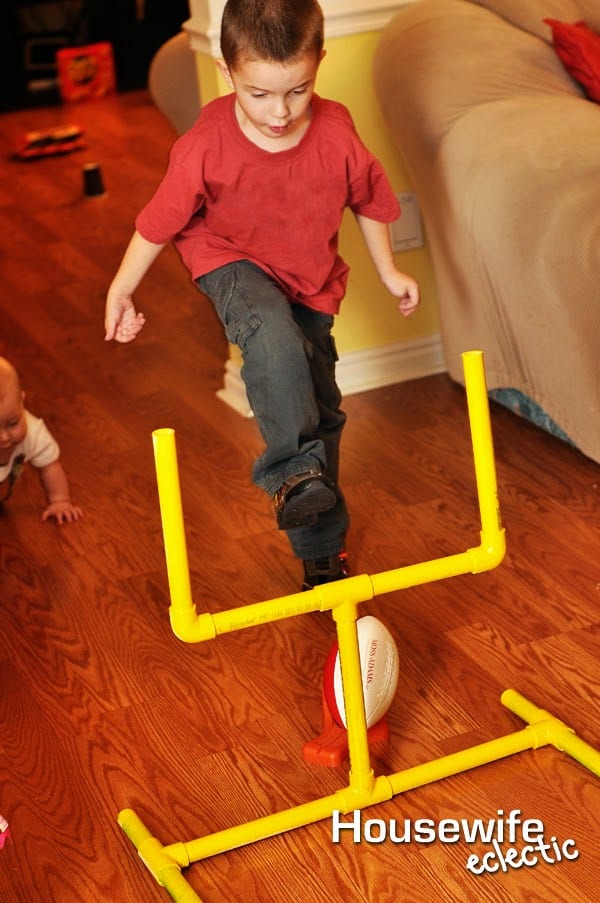 No party would be complete without a cute dressed-up baby. For this party, I dressed the munchkin up as a football with an easy DIY tutu and by adding ribbon stripes to a white body suit. 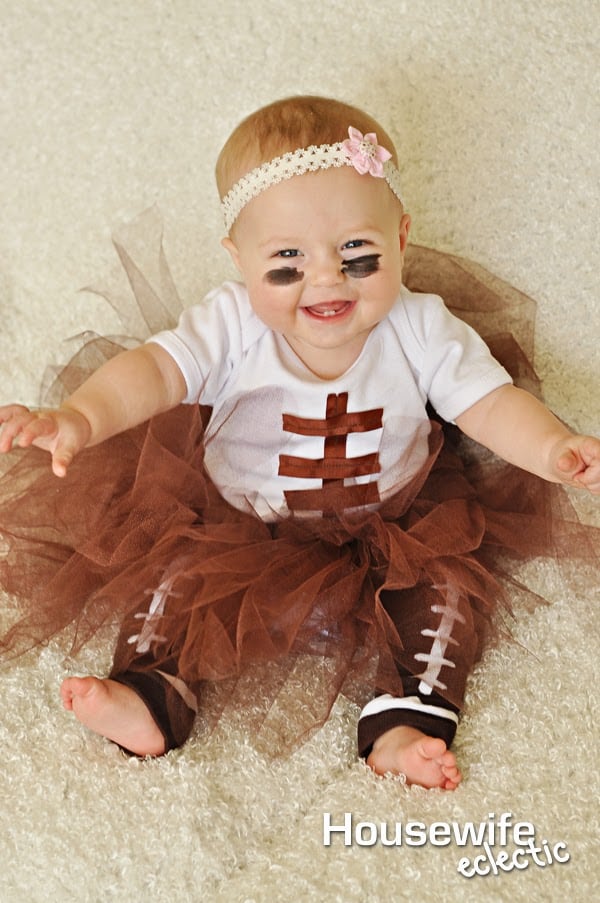 I think her dad missed the memo that he wasn’t actually supposed to play football with her. 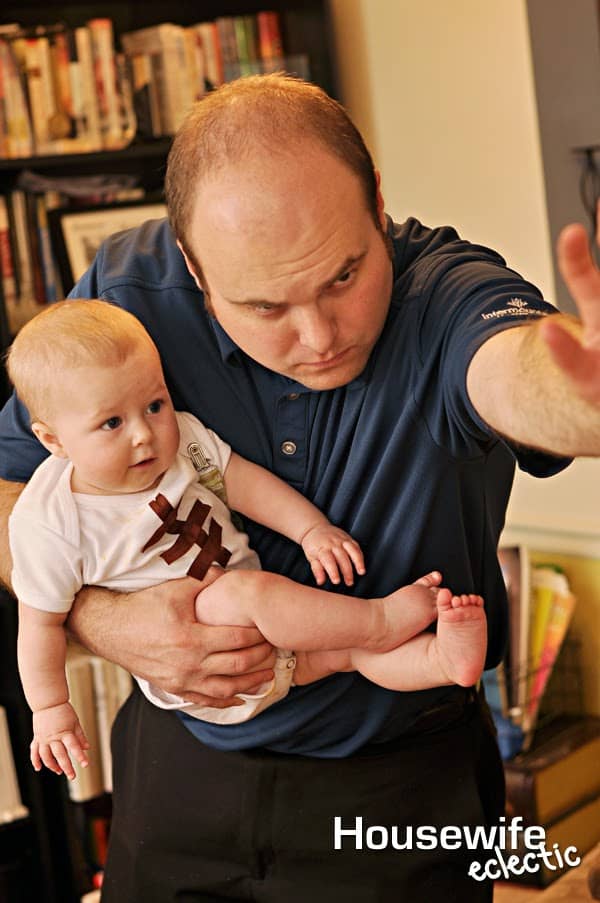 I love having an activity or two on hand in case the kids get restless. These Pringles can banks are easy for even young kids and if your kids are anything like mine, they will LOVE having somewhere to store their money. Simply do a quick rinse of a Pringles container, cover it in brown construction paper, add electrical tape stripes and cut a hole in the top for lose change. 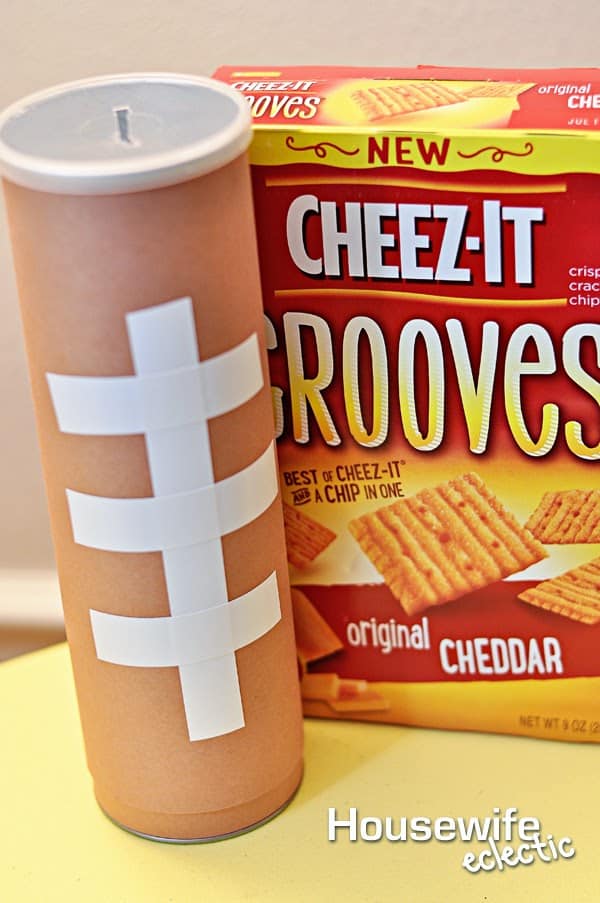 The kids spent most of the night playing football and even the adults got involved in the game. The kids definitely won, but it might have been because every time one of the adults made a touchdown the kids said it didn’t count. The little kids were all thrilled with their dollar store trophies for winning the game! 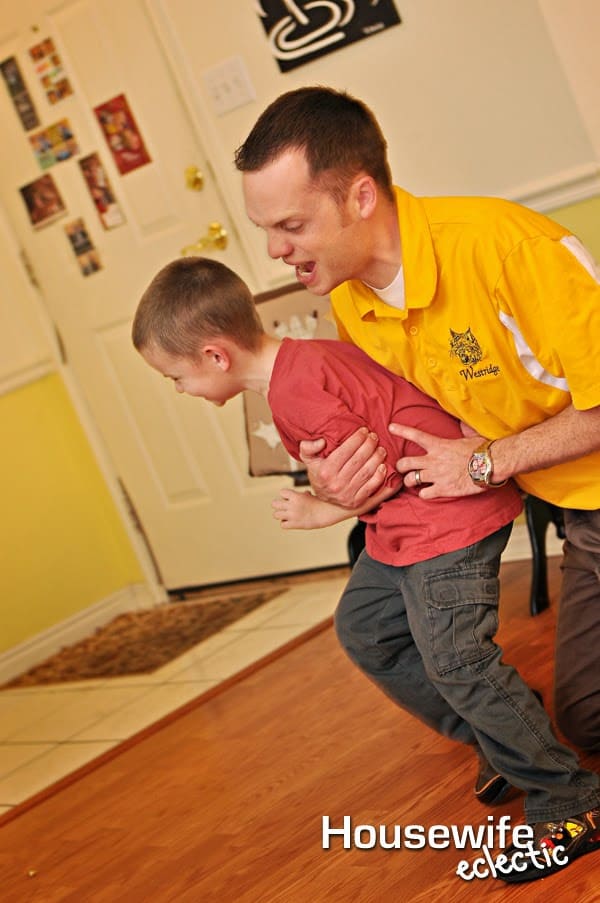 How are you getting reading for the big game?