Olympic fever doesn’t seem to be dying anytime soon at our house. In fact, the girls have spent the last week running around in gymnastic leotards, with medals around their necks. They love the Olympics so much, they even wanted to take pictures of themselves as future Olympians.

These pictures are so simple and fun. I dressed each girl in an leotard and pulled their hair up into a bun. Then each girl took a turn lying on the ground, imitating hand stands and leaps on the balance beam, so I could take their pictures.

I have seen these pictures done before with chalk. You draw the balance beam and rings on the ground before you take the pictures, so as soon as you snap the pictures you have your images. I personally decided to go the Photoshop route. 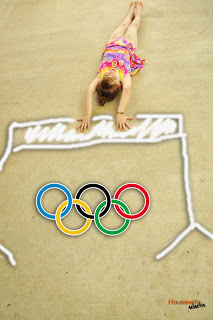 After I had the images, I first selected just a white paint brush and drew in the balance beam. If you don’t have Photoshop, you could actually draw the balance beam in, in paint. You won’t be able to add the drop shadow effects in paint, but you will get the idea.
After I drew the beam, I added the rings. I did this in the easiest way possible. I searched for an image of the rings with a transparent background. Make sure to find one with a transparent background, typically a PNG image. As soon as you have one with a see-through background, you can simply open both images in Photoshop and then copy and paste the rings on top of the photos of your future Olympian. 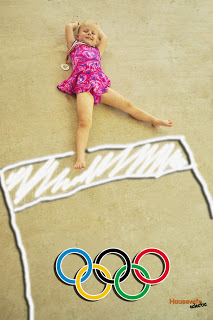 These pictures only took a few minutes and the girls are obsessed with them. They keep talking about the day when they are at the Olympics. Until then, I guess we will just keep taking some fun photos.