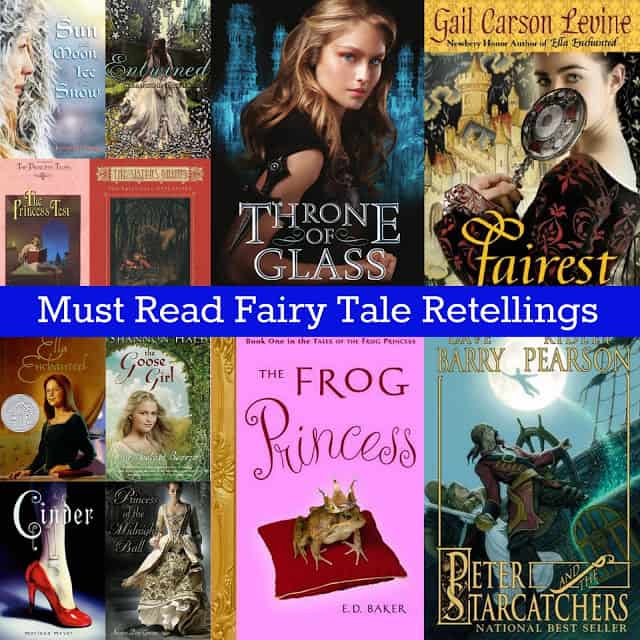 We all know the classic fairy tales. Cinderella loses her slipper but the prince finds her anyway. The 12 Dancing Princesses are eventually saved in the end, but what if the story was different? What if Cinderella was a Cyborg or under a fairy spell. Fairy tale retellings are some of my very favorite books, because you think you know where they are going but that isn’t always the case. These are some of my very favorite retellings of classic fairy tales, some stick to the story and some use the original story as more of guidelines than actual rules.

Ella Enchanted by Gail Carson Levine– Ella Enchanted will always hold a spot in my heart. Is is a fantastic retelling of Cinderella in which Cinderella is under a curse of obedience. She would have to hurt herself if commanded to, she keeps her curse a secret but that doesn’t stop some people from taking advantage of it. She becomes close to the prince but soon realizes that her curse could bring down the kingdom and goes on an adventure to try and break the spell. I love this version of Cinderella, fairies, ogres, and of course bratty stepsisters.

Cinder, Scarlet, Cress and Winter by Marissa Meyer – The Lunar chronicles not only puts a modern day on some of your favorite fairy tales, but it combines them into one story. Cinder is the story of a cyborg Cinderella who falls in love with a prince. Scarlet is the story of Red Riding Hood as a pilot. Cress stars as Rapunzel, a programmer trapped in an orbiting satellite. Winter comes out this year and I am thrilled this is one series that I think has just gotten better and better with each book.

Entwined by Heather Dixon– Azaela and her sisters love nothing more than to dance, when their mother dies any joy that they might have found from dancing is taken away from them. They find a world of magic below their feet where they can dance to their hearts content. The world led by the keeper is a place they cane be themselves, but they will soon find that it comes at a high price. I loved this retelling of the 12 Dancing Princess. The characters are engaging and the story is fun to read.

The Goose Girl by Shannon Hale– When Ani is sent to a foreign land to marry a foreign prince, she thinks life couldn’t get much worse. Then her lady in waiting leads a mutiny and takes her place. Ani becomes a Goose Girl to the queen and must figure out a way to save herself and the country from the pretend princess. The Goose Girl is a retelling of the same story by the Brothers Grimm. I love this retelling and she expands the story into an entire series.

Princess of the Midnight Ball by Jessica Day George- Rose and her 11 sisters have been condemned to dance every night for the King Under Stone. Galen in a soldier just returned from war determined to free the sisters from their dancing fate. Will he be able to keep the sisters from dancing for all eternity? This retelling of the 12 Dancing Princesses is a pretty classic retelling, sticking pretty close to the story.

Throne of Glass by Sarah J. Maas– Brought back from laboring in the salt mines of Endovier for her crimes, assassin Celaena, is given the chance to win her freedom by competing with other criminals for the chance to be the King’s Champion. As the trials begin, the contestants start turning up dead and Celaena must wonder what else is going in the castle. This series has taken on a whole life of its own, but you will still see small bits of Cinderella in there now and again, that is, if Cinderella was a kick butt assassin.

Sun and Moon, Ice and Snow by Jessica Day George– With the promise that her family will be made wealthy if she goes with him, The Lass travels with an enchanted polar bear to his castle far away. The castle and its silent staff are almost too much for The Lass to stand when she makes a mistake that could change everything. This retelling of East of the Sun, West of the Moon is captivating and fun! A quick and light read.

Fairest by Gail Carson Levine– Aza isn’t a dainty princess, in fact she is a plain peasant and in a land that prizes beautiful faces and voices more than anything else, she sometimes feels out of place. Aza does have a gorgeous voice and the talent of being able to throw her voice to sound as if it is coming from anywhere in the room. A passing duchess invites her to court and then the queen who has a plains singing voice insists she stays so that she can use Aza’s voice as her own. Aza must learn to stand on her own feet and use her voice for good instead of allowing it to be used by the evil queen. This retelling of Snow White takes place in the same universe as Ella Enchanted and although not my favorite retelling, it is full of fun and gnomes!

The Princess Test by Gail Carson Levine– This short and sweet novella is a run retelling of The Princess and the Pea. Prince Nicholas is to marry, but his mother is making it as hard as possible. She wants to find a true princess, but how can anyone ever pass all of his mother’s tests. This junior grade book is a great read aloud book and it is often paired with Gail Carson Levine’s retelling of Sleeping Beauty as well!

The Rough-Face Girl by Rafe Martin– The Invisible Being is looking for a wife and every girl in the village hopes to be chosen, but only the one who can truly see him can be his bride. The two spoiled daughters of a villager try for his hand and laugh when their disfigured sister thinks to try for herself. This Algonquin version of Cinderella is a picture book, but a very moving one. One that I love to read over and over again.

The Sisters Grimm by Michael Buckley– This isn’t exactly a retelling, but you will see all of your favorite fairy tale characters make an appearance in this story about the descendants of the Brothers Grimm who have to keep all of the fairy tale characters out of magical mischief. This is a junior grade book that is perfect to read aloud.

The Frog Princess by ED Baker– Princess Emeralda is nothing like a stereotypical princesses and she does not want to marry Prince Jorge at all. When Emma is convinced to kiss a frog to help him turn back into a prince, she is turned into a frog instead. It is quite a story for unlike the Disney version, Emma must fend for herself on her adventures.

What story do you hope to see in a retelling?