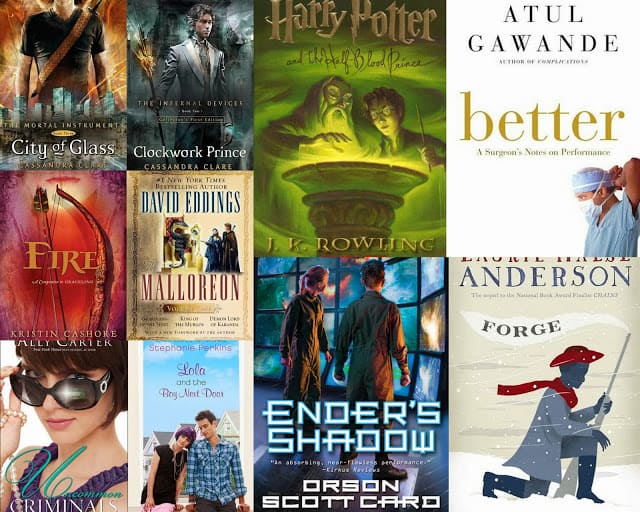 I almost always feel a little sad when I finish a good book. The one thing that helps is knowing there is a sequel waiting for me. Sometimes the sequels are terrible and sometimes I love them. Here are some of my favorites. Linking up with The Broke and The Bookish.

Lola and the Boy Next Door– I know a lot of people didn’t love this one as much as Anna and the French Kiss, but I am enamored with it. I really loved Lola’s bright, fun personality and the story unfolded beautifully. I especially loved see a little bit more of Anna.

The Malloren– This is an entire sequel series to the Belgariad series. I wanted it to never end and so I loved that I had another series to turn to with most of the same characters. I loved even more that he gave us prequels in the form of Belgarath the Sorcerer and Polgara the Sorceress. This will always be some of my favorite books.

Uncommon Criminals– I love this fun, light book. What would you do if your family was full of con artists? Pull heists together of course. This entire series is just fun.

Harry Potter and the Half-Blood Prince– I will always love this book, I feel like it was the book where we finally had so many questions answered. I don’t know that it is my favorite, but it set up so much!

Ender’s Shadow– Less of a sequel and more of Ender’s game being told from a different perspective. I loved finding out all of the little things that weren’t mentioned in Ender’s game.

Better: A Surgeon’s Notes on Performance– Like his first book, this book delves deep into our medical system. I really loved learning how they have improved performance in the medical filed over the last 100 years. If you get queasy really easy, this might not be the book for you.

Forge– This book is a continuation of Chains, which focuses on the fight slaves in America for their freedom while America was fighting for its freedom in the Revolutionary War.

Fire– This is more of a companion novel to Graceling, than a sequel. One major character causes havoc in both books. I felt like reading Fire actually helped me like Graceling even more than I already did. I loved the character of Fire and her story could have stood on its own.

City of Glass– This is one of my favorite books from the Mortal Instruments series. I feel like the first two books were fine, but this is where the series really began to take off.

Clockwork Prince– I liked Clockwork Angel. It was fine, but it wasn’t until I read the second book where I was completely in love with the series…and Will.

Some of my other favorite sequels that I would hate not to mention- Scarlet, Shadow Kiss and the Bloodlines series.