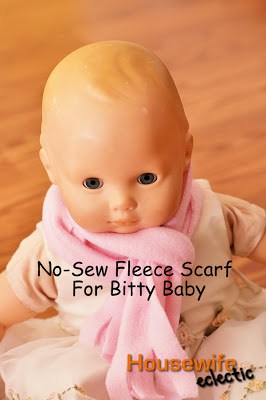 It has been freezing here and the air is gross. We haven’t been out in days because I don’t want to breathe the nastiness. Even though we have spent the days indoors, my daughter has become suddenly very concerned that her beloved baby doll is freezing. She begged me to make her a scarf and so I made a simple one out of fleece.
I originally didn’t intend to blog about this simple craft, but after mentioning it, I have had lots of questions of the measurements I used, so I though a post was in order.
You will need:
A piece of fleece approximately 29 inches long by 2.5 inches wide
scissors
After cutting several lengths of fleece, this is the one that seemed to work the best. After cutting the strip, I added simple fringe to the ends by making one inch cuts into the fleece about half and inch apart.
It took me less than five minutes and if my daughter was a little bit older, I would have had her make it. Easy, simple and now my daughter thinks I am super mom for making her doll a scarf.