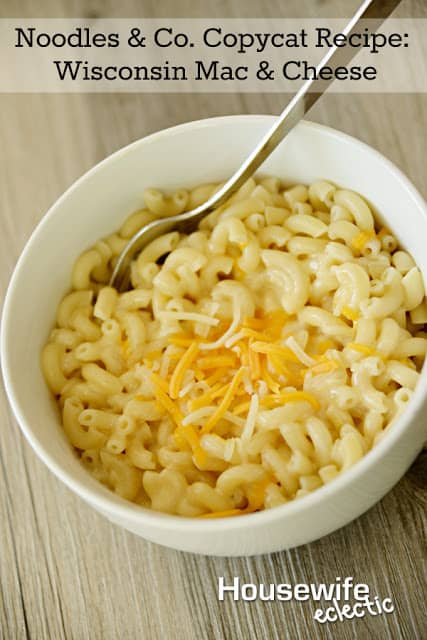 If I had to pick one food to live on for the rest of my life, it would be Mac and Cheese. There is something so comforting and happy about a big bowl of Mac N’ Cheese. I have tried this dish in just about every restaurant  around us that serves it and Noodles & Co has one of my favorite versions. I just had to keep tweaking my homemade version until it was just right. I think the best part of this recipe is stirring in the cheese!

Cook the noodles according to the package direction. Over medium heat, add the the butter to the pan and melt. After the butter is melted, whisk in the flour. Cook your roux until in bubbles and browns, whisking the whole time.
Add the milk, whisking until the mixture starts to bubble and thicken up. Whisk the Monterrey Jack Cheese and paprika into the mixture and whisk until melted in. Place about half a cup of cheese sauce in the bottom of a bowl. Add a layer of noddles and then a handful of Colby Jack Cheese on top. Salt and Pepper to taste.
I don’t always want to make a full recipe of this, because often it is just my baby and I eating it for lunch, so I will half the recipe with 1 tablespoon of flour, 1 tablespoon of butter and 3/4 a cup of milk. It is a perfect serving for me and a little one. If I don’t have Monterrey Jack on hand, I will use Colby Jack for both cheese ingredients and it is just as delicious.
How do you like your Mac N’ Cheese?