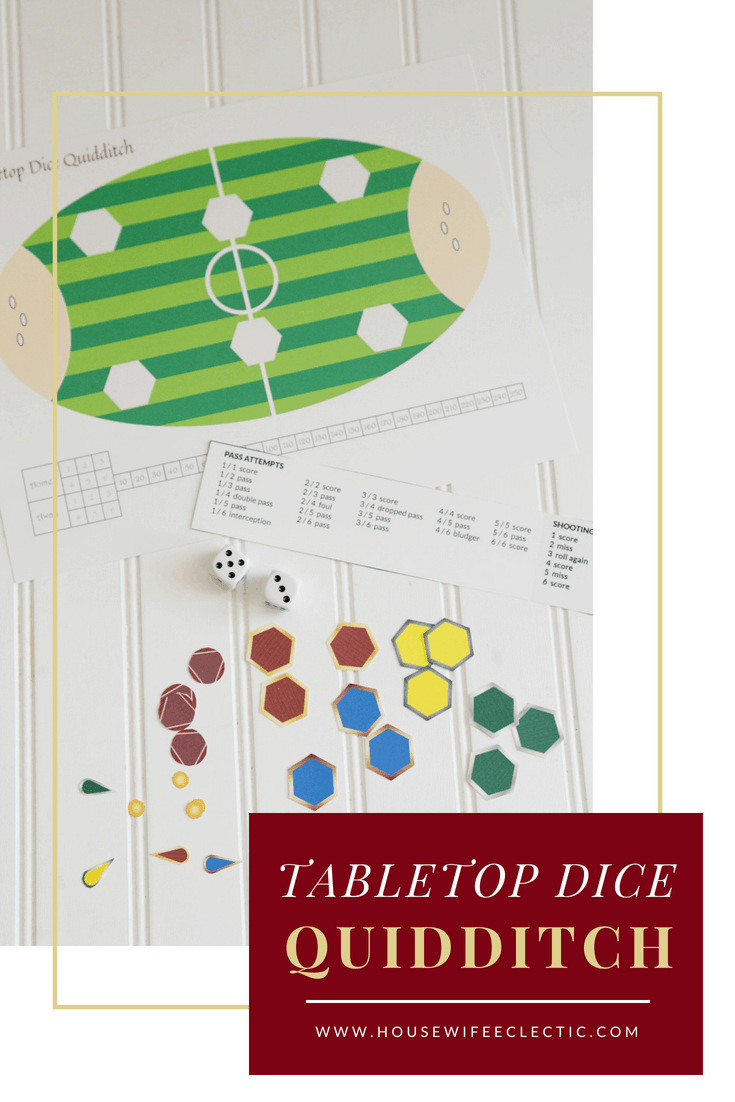 Of all the fascinating aspects of the world of Harry Potter, the one that has always stood out to me is Quidditch.

If you’re going to invent a school for magical kids, of course, you would need some sort of sport for them to play. Sports are an essential part of middle schools and high schools in the real world, so it would be only logical that they would have sports in the magical world. And if the rest of the magical world is going to be so different from the Muggle world, wouldn’t they need a sport that’s truly unique (although magic soccer sounds pretty awesome)?

As a die-hard sports fan, I love reading about the Quidditch games. It’s a sport I’d love to watch and play. It’s unfortunate my sad Muggle-ness prevents me from hopping on a broom and making that dream a reality. So I need another way to play Quidditch.

Enter the Quidditch Tabletop Dice Game. This dice-based tabletop game is perfect for Harry Potter fans who just can’t get enough of Quidditch. The only thing you need to play is this free Quidditch printable and two dice.

I invented this game after revisiting my love for tabletop dice baseball, a game that was popular among kids of my parents’ generation. I grew up playing the game and have many fond memories of it. I wanted to translate that same experience to Quidditch. So I did. 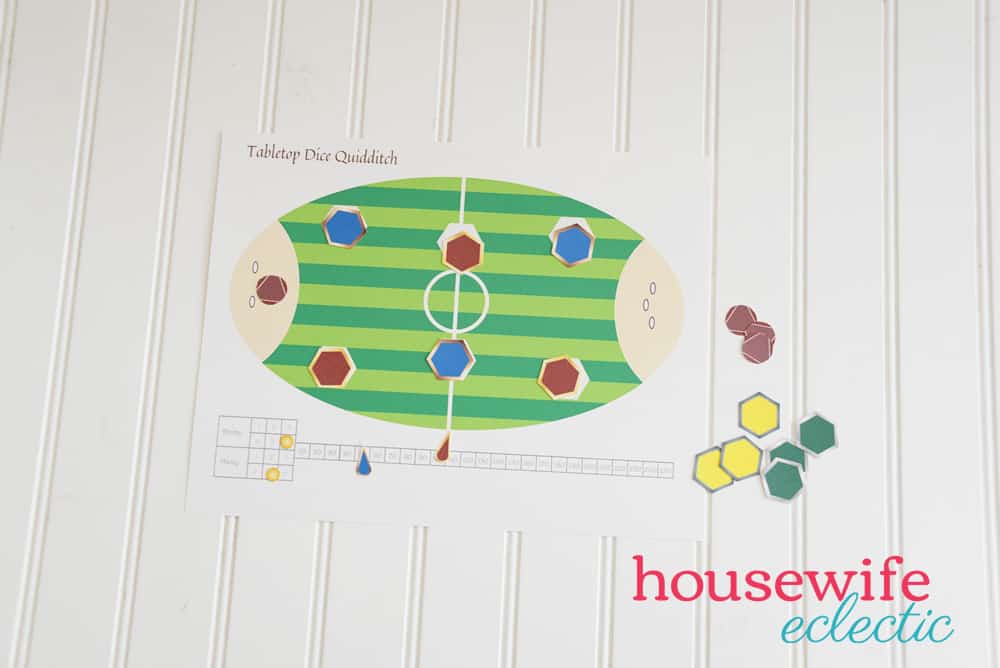 How to Play the Quidditch Tabletop Dice Game

The Quidditch tabletop game is a fairly easy game. There’s a game board shaped like a Quidditch piece. Then there are six empty hexagon placeholders. Each team places three of their colored hexagons (representing players) onto the board in alternating fashion.

While there are more than three players from each team in an actual Quidditch match, these are all the players that are really needed to replicate the majority of the meaningful action. Let’s be honest, as fun as it was to read about Fred and George knocking people off their brooms with bludgers, it didn’t ultimately affect the outcome of the game.

Rolling the dice determines what happens during a play. A scoring guide helps you know the result of each dice roll. You must make three passes to get in scoring position and then you get a chance to shoot and hopefully score. Each score is worth 10 points, just as in the actual game.

Each time you roll a double, you get an automatic score and a Snitch sighting. On the sixth sighting, you have caught the Snitch, ending the game and earning yourself an automatic 150 additional points.

The game includes markers to track each team’s score and the number of Snitch sightings.

It’s an easy game to learn and fun to play. There are hexagon player markers for Slytherin, Gryffindor, Ravenclaw, and Hufflepuff, so you can represent your house with pride. Play a series of games to determine the overall victor of the Hogwarts Quidditch Cup.

This is a fun game to play with kids and is a great way to further immerse them in the fascinating world of Harry Potter. My daughter and I play this game frequently. It’s honestly a game of luck, so young kids have just as good of a chance at winning as adults.

If you’re ready to get playing, download the free printable. You’ll probably want to print it in color on cardstock. If you don’t have your own printer, you can easily get it printed at your local copy store for a couple bucks. For further durability, it may be smart to laminate the sheets before cutting out the pieces. You will need to supply your own dice. 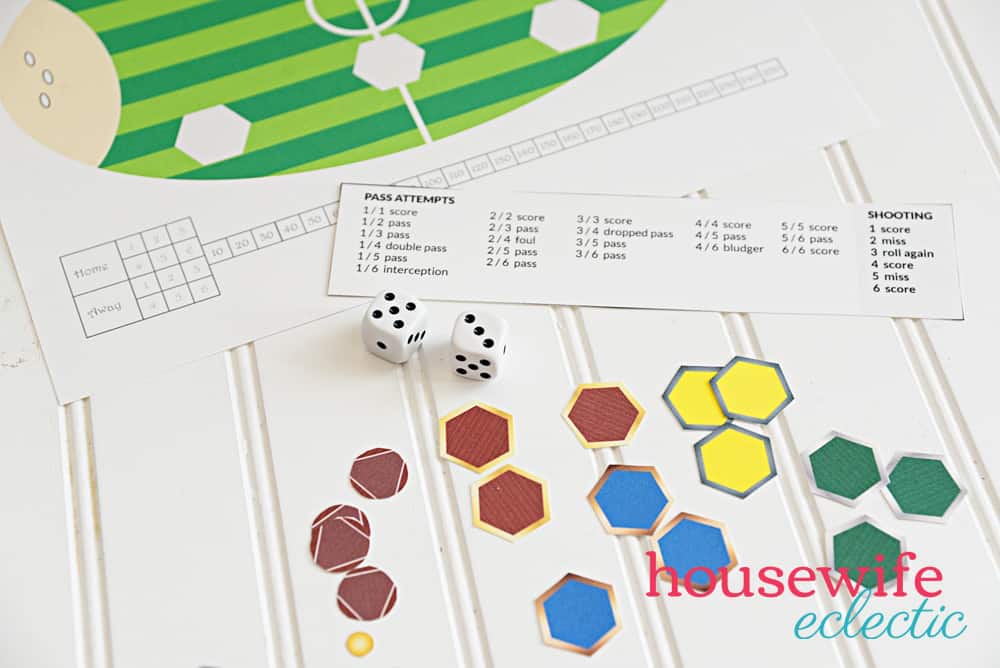 Each player adds their Game Board Position Markers to the game board in an alternating pattern.

Roll one dice to see who goes first (away team). The person who rolls the highest number goes first.

Use one Quaffle piece to play the game. This piece serves as the marker to show how a player has advanced across the pitch and into scoring position.

Start the game with the Quaffle positioned on one of the far ends of the game board next to the hoops.

For each turn, roll both dice. Use the scoring reference guide to see what the resulting roll means. For each dice roll, you always read the lowest number first.

To score, a player must roll the dice and advance the Quaffle to the position marker furthest from their starting hoops. This generally takes three successful pass rolls (although there is a double pass roll which advances the Quaffle two places).

Fouls, interceptions, dropped passes, bludger hits, and missed shots all count as turnovers. When a turnover occurs, the Quaffle stays in the same position on the board, but moves to the other player’s parallel Game Board Position Marker. (Example: If player one is on their first marker and rolls a turnover, player two takes over from that position on their parallel marker, which means they’re immediately in scoring position.)

After a successful scoring attempt, the Quaffle is moved to the other player’s starting hoops. Each time a player scores, they move their Score Marker to the appropriate score on the score table below the Quidditch pitch. Each score is worth 10 points. 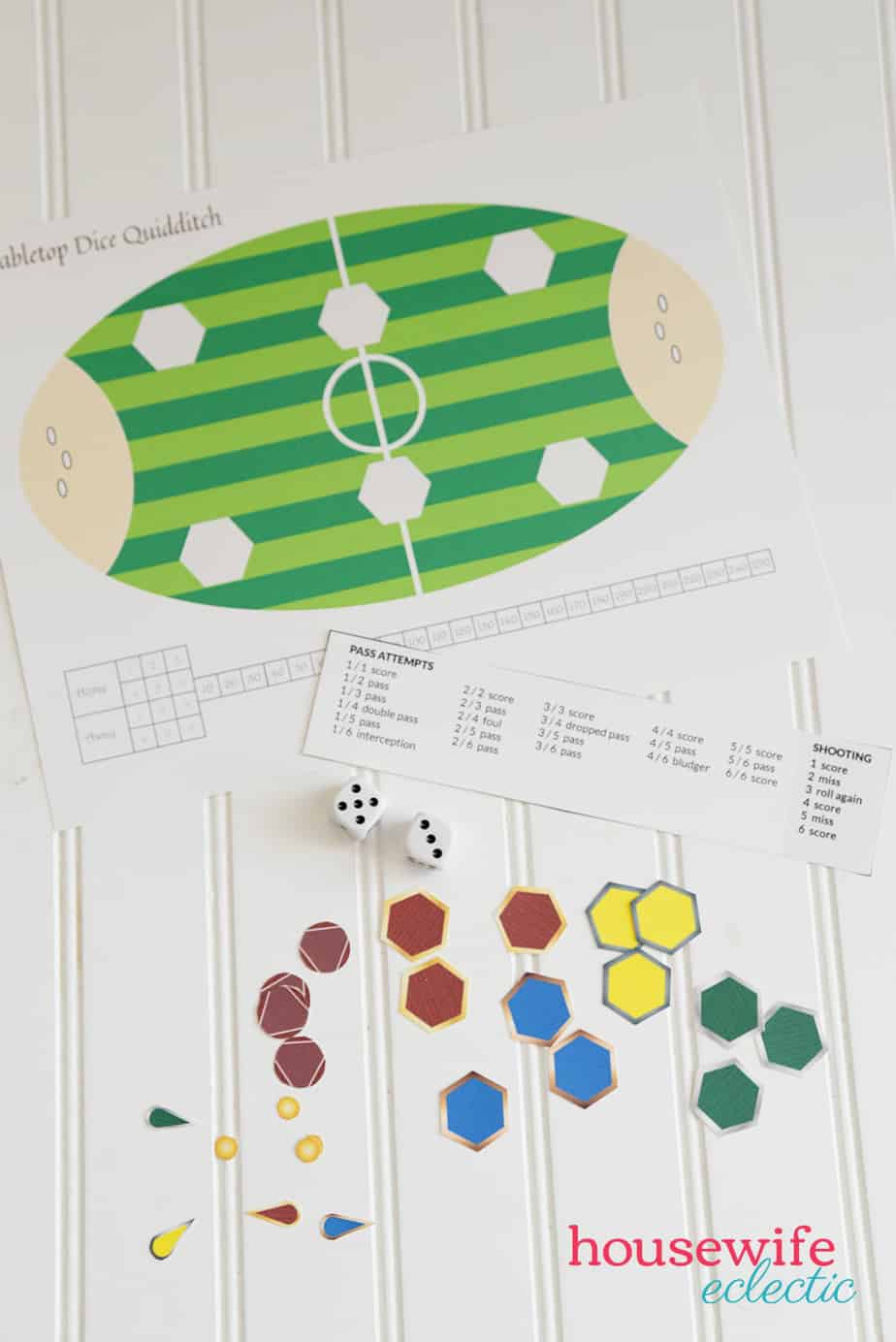 To “catch” the Snitch, a player must roll 6 doubles over the course of the game. To track their progress, each player places a Snitch Marker on the appropriate Snitch catch attempt number in the scoring area.

The game ends when a player “catches” the Snitch (rolls 6 doubles) and earns an automatic 150 additional points to their previous score.

The player with the highest score at the end of the game wins.