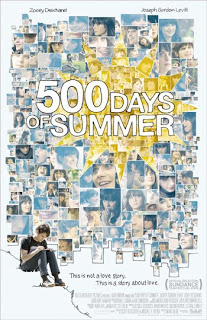 I kind of had an idea of what this movie was about going into it and I thought I was going to hate it. It is about the span of a relationship, from beginning to end. So yes, you know very early in the movie that the relationship ends. How could I like a movie where they don’t end up together?

I did like it. I didn’t love it but I didn’t hate it. Why did I like it? Sometimes people just aren’t supposed to be together. I think we have all had a relationship at one point or another. Where one of us is madly in love and the other one is only so-so. Or where we both really love each other but aren’t good for each other. Everyone has gone through a breakup and so it felt real to see it happen on the screen. In fact part of this movie seemed more real than any other dating movie I have ever seen. There was awkward dialogue with awkward pauses. There was the happy ecstatic moments and the days where you just can’t stand each other.

This movie doesn’t end happy but it does end hopeful, which is sometimes more important than happy. A world with hope has promise. This movie did have its laugh out moments and irritating moments but those moments you understood because you have been there.

This movie can be summed up in one of its quotes. “Just because she’s likes the same bizzaro crap you do doesn’t mean she’s your soul mate.”

Maybe if I wasn’t in a committed relationship, I would have hated this movie but as someone who found the light at the end of the tunnel, I didn’t mind it. It is not a movie I am going to run out and buy but I don’t think I am going to forget some of its quirks anytime soon, because, “I don’t know how to tell you this, but… there’s a Chinese family in our bathroom.”