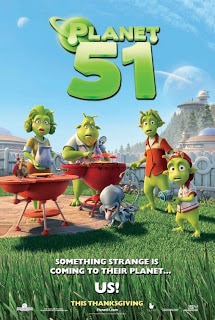 This was one of those movies that we rented and then had to force ourselves to watch. We rented it while in a particularly giddy mood but then for the rest of the week we have been stressed out. It took awhile for us to put it in the DVD player, so was it worth it? Kind of, Sort of, a little bit, I guess.

Planet 51 was clever in the sense that it was the complete reverse of most alien movies out there. This movie did had some hilarious parts mostly culture references to movies such as E.T. and protesters. This movie is set in the 50s, which was clever because that is when the alien craze began here.

We did laugh in parts, but even at an hour and a half this movie seemed to drag on and on and on. The astronaut from Earth was such an idiot that we wondered how the heck he ever became an astronaut. We couldn’t figure out why the main character was in love with this girl that was a complete jerk to him either.

We laughed. We rolled our eyes. Overall, it was OK. It is not that long so it is probably worth a watch but just one.