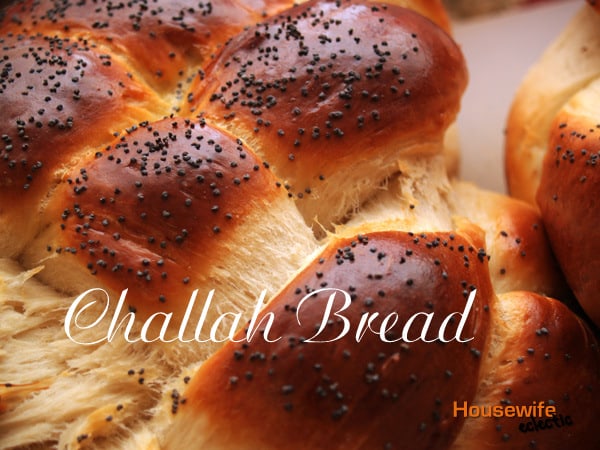 I am no expert on Challah bread. I just know it is delicious and I love it. I first tried it at a friend’s house and attempted it several times before I found a recipe that I understood and tasted like I remembered. Here is the simpler version I make, it still needs three risings but it doesn’t have nearly as many steps as the recipes I started with.

You will need:
1 and 1/2 tablespoons yeast
1/2 cup and 1 tablespoon sugar
1/2 cup oil
5 eggs
1 tablespoon salt
8 cups of flour
poppy seeds to sprinkle on top
water
(You can add raisin to the bread, but as a general rule, I hate raisins in bread, so I never do.)

Mix 1 tablespoon of sugar and the yeast in 1 and 3/4 cups warm water. Add the oil while mixing, then add  four of the eggs, one at a time. Add the rest of the sugar and the salt, mixing while you go. Add the flour one cup at a time until the dough sticks together. Knead the bread until smooth. Place in a covered, greased bowl to rise. Let the dough rise for an hour or until double in size.

When double in size, knead the dough again and then place to rise for another 30 minutes. Roll the dough out into strands about a foot long and braid. Beat the last egg and brush on the bread, let the bread rise for about another hour.

Sprinkle the bread with seeds. Bake in a 375 degree oven for about 35 minutes or until golden.