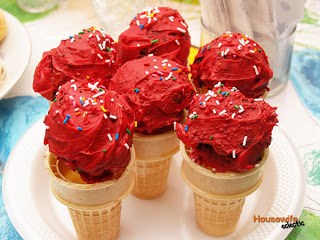 We have all seen some amazing cake pops and for the longest time I thought they were way beyond my skill level, until I decided to make these. These aren’t supposed to be perfect, and so they were a great first attempt.

You will need:
a chocolate cake, crumbled with a container of frosting, you can get more specifics here.
melting chocolates- I found I needed more than I thought I would
sprinkles
ice cream cones
pudding
a cookie sheet covered with wax paper

Form the cake into balls, much larger than if you were making cake pops. I found I could get about 15-16 balls out of one cake. Melt the chocolate according to the microwave directions on the package. Roll the balls in the chocolate. This was the hardest part for me, but since you want them to look like drippy ice cream cones they can be a bit messy. Place the covered balls on wax paper until firm. I like to pop them in the fridge because I am impatient.

While the cake balls are firming up, mix up your pudding. I filled about half of the ice cream cones with pudding and left about half of them empty. The pudding will weigh down the cone and make the cake ball stick. You can leave the pudding out on some for those people who don’t want so much sweet, but then you will need to dip the top of the cone in melted chocolate and place the ball on top before it dries to get it to stick to the cone.

I used these as a refreshment for a bridal shower, and people loved them! It was an easy and fun project, it makes me want to make them in all different colors.