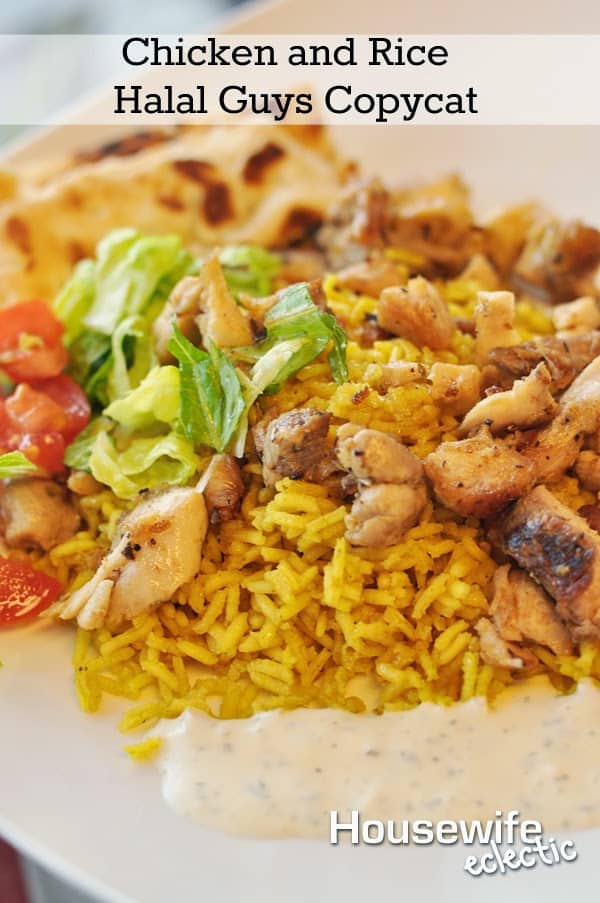 Last year, I went to New York City for a week with my husband and my mom. It was an amazing trip — what can I say, I love New York!

Even though we saw a ton of cool things, we were a little bummed by most the food we tried. We love to eat out and knew New York was a food paradise, but we must have chosen the wrong places. But there was one place that stood out above the rest and was the best food we had while we were there. No, it wasn’t a fancy restaurant, it was from a food cart.

At 11, one night, my husband and I were starving after a day of running around the city. We stepped out of our hotel, the Midtown Hilton, and saw a couple food carts across the street. The lines were pretty long, even that late at night, so we figured they had to be good. We chose one of the carts and ended up getting a chicken and rice plate for about $6. There was so much food on the plate that both of us ate and couldn’t finish. And it was amazing!

After we came home from the trip we both craved it. We read up about the cart and learned it’s actually quite a popular food cart. Was it just coincidence we ate at the best food cart in the city? I don’t know, but I knew we had to make it ourselves.

Even if you’ve never had street cart food before, you’ve got to give this a try!

Chicken Prep: Place the lemon juice, olive oil, oregano, coriander and garlic in a blender and blend until smooth. Put half the marinade and chicken in a gallon bag and refrigerate. Spread the marinade well to make sure the chicken is coated. Refrigerate for 1 to 4 hours.

Remove the chicken and pat dry. Sprinkle with salt and pepper (don’t skimp on the pepper!). Heat oil in an electric skillet at medium-high heat. Cook the chicken for 4 minutes. Flip the chicken, and reduce the heat to medium and cook until the chicken is cooked through (about 6 minutes). Remove chicken from heat and allow to cool for 5 minutes for juices to redistribute.

Chop the chicken into 1/4-inch chunks and place in a large bowl. Add the other half of the marinade that you didn’t use to marinate the chicken originally.

Rice Prep: Melt the butter in a large pan. Add the cumin and turmeric and cook about 1 minute. Add the rice and stir until rice is coated a nice yellow color. Lightly toasted the rice, stirring occasionally. Add the chicken broth and salt and pepper to taste. Bring to a boil. Cover the rice and reduce to a simmer. Cook for about 15 minutes without disturbing. Remove from heat and let the rice absorb the rest of the liquid until tender, which takes about 15 minutes.

Serve: Place the chicken and the marinade back in the heated electric skillet and cook over medium-high heat until heated through.

Serve by placing a bed of rice on a plate and top with the chicken. Serve with chopped lettuce, diced tomato, and toasted pita bread. The sauce is on the side (or on top if you love that much sauce, but be careful because it’s kind of tangy). Hot sauce is also good with it.

This dish takes a bit of preparation, but it’s super yummy. The pita bread is amazing with this. Use it to scoop up the rice and chicken instead of a spoon.