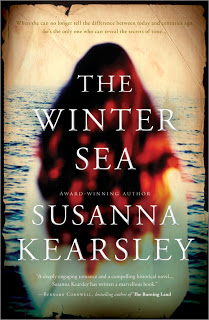 I have read a lot of books in my life and I have loved many of them, but few of them have broken my heart. Broken it, not necessarily because of sad material, although there is plenty of that, but broken it because the book is finished. Broken, because I no longer get to go along each adventure, discovering things as the characters do. The Winter Sea by Susanna Kearsley is one of those books. I feel at a loss after reading it because I want it to go on and on. I miss the characters as I miss old friends.

The Winter Sea is a story within a story. Carrie McClelland is a historical fiction novelist trying to work on her lastest novel, a book about the Jacobite uprising in Scotland in 1708. She finds the book slow going until she visits a place one of her ancestors lived during the same time period, then the book flows faster than anything she has ever written before. Carrie begins writing about her ancestor and her part in the uprising, only to find out later that characters and places she thought she had made up actually existed, leading her to believe in some sort of genetic memory between her and her ancestor, Sophia.

The Winter Sea is beautifully written between the two time periods, following Carrie’s modern day romance, as well as Sophia’s romance in the 1700s. Despite the two distinct running story lines through the novel, it is easy to follow and intricately intertwined. The rich, colorful descriptions of all of the characters and the gloomy, stormy seaside made this book one that I couldn’t put down. Although it broke my heart in more than one place, I had to keep reading because it was so beautiful. I enjoyed the dialect in the book and it was written in such a way that I didn’t find myself confused about what the characters were trying to say.

There was just enough romance and intrigue to keep me turning the pages, but not so much that I was constantly rolling my eyes at cheesy expressions. The only thing this book left me with was a desire for more. I wanted a little more back story and I wanted to hear more about the resolutions that eventually came about, but overall I just loved it. I am adding it to my list of favorite reads, give it a chance and it just might end up on your list of favorites too.