I blame it all on Ryan Seacrest.

No, it’s not just because he has hair that’s the prized jewel of California, or the fact that he hasn’t aged a second since he turned 21. It’s because of what he did. It’s that show: American Idol. They made texting useless drivel to five-digit phone numbers popular. And now it’s causing me grief.
About a week ago, I looked on my Manilla account to see what my cell phone bill was this month. I was expecting the typical amount, but you can never be too careful. I’m glad I looked because my bill was $10 more than usual. Granted, $10 isn’t a lot, but anytime I get charged extra, I sure want to know why so it never happens again. 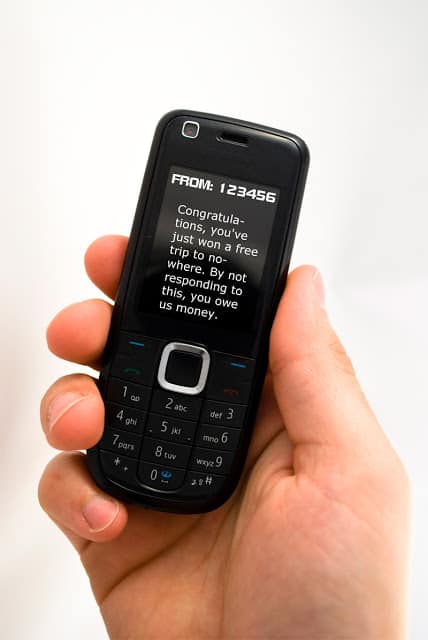 As I looked through my itemized bill, I came across a $9.99 Premium Service charge. It didn’t tell me anything besides that. I called up T-Mobile and talked to the nicest rep ever. She looked it up and discovered it came from random business called Jesta. They had sent my wife one of those obnoxious spam text messages from a 5-digit number. Seeing it was a junk message, she didn’t do anything with it, though I’m sure they promised her a million dollars if she texted, “I <3 data-blogger-escaped-66249.=”” data-blogger-escaped-div=”” data-blogger-escaped-monkeys=”” data-blogger-escaped-to=””>
What this message actually did was automatically enroll her in a premium service subscription plan that would charge her phone bill $9.99 every month. That’s right, by not doing ANYTHING, she was automatically enrolled in something she didn’t want, didn’t know about and didn’t need, and it was charging her for it. Sounds an awful lot like Congress…
I asked the service rep what we had to do to get out of this. Her answer shocked me. It was against everything I had ever believed with spam messages. She said to simply text: “STOP” to the number and that would remove the service. That’s right, actually respond to the junk text. The very thought of it made me cringe.
Then I had to call up the company and demand they remove the charges, which they did, though the refund could take about as long to arrive as it will take a Twinkie to decompose.
The reason I’m going through this whole story is to make you aware of something I didn’t even know was out there until I called T-Mobile. There are plenty of companies out there like this Jesta service. Every 5 or 6-digit phone number is considered a short code and most of them charge your cell phone bill as premium services, regardless of which phone service you are with. This includes TV text contests (like American Idol), text contests at sporting events, spam messages and even some charitable donation groups.

If you are like me and just ignore these messages, they can automatically enroll you in their service and charge you until you text STOP and call them. This is not only annoying, it’s criminal. It’s like walking down the aisles of Wal-Mart and charging people $9.99 every time I say hi to them, just because I said hi.
Thankfully, most phone providers have a service that will allow you to block all 5 or 6-digit short code numbers. This means you won’t be able to vote for your favorite American Idol contestant (darn, what a loss), but it will sure save you a lot of grief. Call your phone service and enroll in this service. It’s usually free.
In the meantime, look through your text messages and make sure you haven’t received any of these lately. If you have, check your phone bill, call your cell provider and make sure you aren’t being charged. Also, this would be a worthwhile cause to lobby your local congressperson about. Let’s make this criminal practice illegal.
What’s frightening to me about this is the potential for viruses to be transmitted. As more and more people use smartphones, we’ll start to see viruses appear like they do on traditional computers. Texting could be a way to transmit those viruses. But you can’t always control who texts you, and when you send a response, you’re opening yourself up for potential viruses. This bothers me a great deal, which is why I feel it’s important we bring awareness to this issue now before things get out of hand.
So the moral of the story? American Idol owes me $9.99. And I want Ryan Seacrest’s hair.