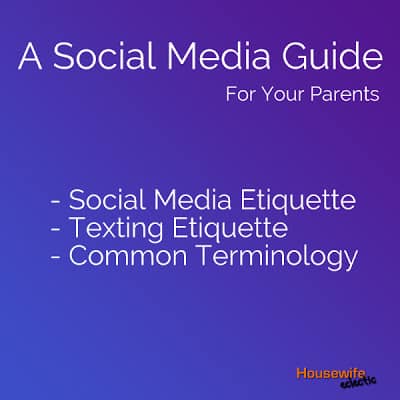 Last week, I was at dinner at my parent’s place when my mom started talking about the last blog post I wrote about hashtags. Not only was I surprised she read my post, but that reading blogs was even part of her routine. She told me the post was really helpful because she had heard a lot about hashtags, but had no idea what they were.

This got me to thinking about what a strange world social media must be to our parents. Now, I’m sure there are some readers of this blog who are the age of my parents, and I applaud you for keeping up with the times. But chances are most of our parents are late in joining the social media world and are trying to fit in, but just don’t quite get it. And you can’t really blame them for that either.

Social media is a naturally and constantly evolving format, and our generation grew up with it. We learned the rules as we went along, but this is very strange to our parents who grew up with very formal rules for communicating. Think about it. Growing up, your parents probably had rules for how you were supposed to politely answer the door or the telephone. If grandma sent you a gift, you probably had to write a thank-you letter. And if you grew up in the South, you probably learned the value of addressing your elders as sir or ma’am. Our parents are big on communication rules.

But when it comes to communicating on social media, most of those rules don’t apply. But that doesn’t mean there aren’t social media rules and etiquette, because there are. Unfortunately for our parents, they don’t know what most of these rules are or how to navigate the social media landscape. This leads to embarrassing moments on Facebook when your parents join and launch into your conversations, not realizing they may be breaking social media etiquette.

So, in an effort to help you teach your parents a little bit about social media and proper etiquette, I present a short guide you can share with them.

A Social Media Guide for Parents

Let’s start at the very beginning by answering the question, “what is Social Media?” Simply put, social media is any website or service that allows people to share information with others, usually by posting content in the form of text, pictures or video. Social networking, related to social media, takes this one step further by allowing users to interact with each other in some way, often in the form of liking, commenting and sharing content.

There are dozens of social media sites out there now. For a parent who is new to this world, it can be overwhelming. They might wonder, which social network should I join? Do I need to be on all of them? Why join one and not another? Is it OK if I’m not on all the social networks?

WHAT EACH SOCIAL NETWORK IS FOR:

Now that you know the difference, which should you join? That’s really up to you. Millions of people use Facebook and chances are high you’ll have lots of friends and family on there, so that’s a great place to start. But there’s nothing wrong with creating accounts on the other social networks (they’re all free) to see if you like it. Should you be on all social networks? Truthfully, unless you enjoy being on a social network, don’t do it. Social media should be fun, not a to-do item.

One of the biggest hurdles our parents have when it comes to social media is learning the language. Sure, it’s in English, but social media has evolved to a language of its own, including its own abbreviations. Here’s a short list of common terminology found on social media:

Now that we know what social media is for, the different social networks and some terminology, let’s move on to social media etiquette. While not a comprehensive list, these tips should be a good starting point.

Realize social networks are public in nature. Be careful what you post. Even if you have privacy settings set, what you post is still open to the people you’ve approved. Be aware of that. Don’t publish anything you would be embarrassed by, or that might embarrass someone else.

It’s called social media for a reason: be social. If you merely go on social media to see what everyone else has posted, but never contribute yourself, you are just a stalker. And that’s creepy. Even online. Join in on the conversation. How do you contribute? You can post content (text, pictures, video), or you can like, comment or share someone else’s post. All are great ways to be social.

It’s good etiquette to interact with someone’s post if you enjoyed it. Liking a post is not committing yourself to marrying that post or voting for the author to be the next president. It’s just a quick way of giving feedback to someone letting them know you saw their post and liked it. This motivates many people to continue posting interesting content.

Commenting – this is where the biggest breaches in social media etiquette occur, and that’s not surprising considering that’s where the actual conversation happens. When commenting, be aware other people will see your comment. There’s no need to be inflammatory or mean on social networks. If you disagree with the person, that’s fine, but be civil. This rule is broken all the time, but just because others abuse it doesn’t mean it’s OK. Civility starts one person at a time.

Because other people will see your comment, do not include any private or personal information that may potentially embarrass someone else, particularly the person who originally posted the item.

If you want to tell something to someone on social media, use a private messaging feature – most social networks have this. This feature keeps the conversation private between two people. The rest of the world really doesn’t need to know. Posting back on forth on the wall of one another is better served through private messaging.

Before interacting with a post, be sure you know something about the post:
– who is the author
– who are they intending this post for (remember, people have LOTS of different types of friends on social networks. Not every post is intended for all of them, and that may include YOU).
– if you comment on a post, how will it contribute to the conversation? Does it add something useful or is a side conversation? Is your comment “butting in” on the conversation? Just like in verbal communication, think before you speak.

When sharing content, be sure to give credit where credit is due. If you found a great recipe online, let people know where you found it. When it comes to pictures and video, copyright laws still apply, so be careful to post content that is meant to be shared.

When posting, DO NOT USE ALL CAPITAL LETTERS. All-caps indicates yelling online. Plus, it’s harder to read.

Finally, a quick word about texting, which falls in with the social media conversation. Many parents now have texting on their phones, and while they may be slow at it, they’re trying.

Do not send a one-word reply text. For instance, there is no need to text “Thanks” back to someone. It’s kind of implied.

Mass texting is a crime punishable by death. Or it should be. Mass texting is when you send a text to multiple people at once, usually about something frivolous like, “Happy Monday, everyone!” These text messages are not personal, are confusing and take up space on your phone. Resist the urge to send these. The only exception to this rule might be if someone in your family has a baby and you need to quickly let them all know the baby made it safely.

Don’t go overboard with texting. Just because you have an unlimited texting plan does not mean you should send an unlimited number of texts. Text messaging is meant for quick messages to get quick answers, not morning “I love you” wake-up calls. Or to ask, “What’s up?”

If you find yourself texting back and forth multiple times within a few minutes time, it’s better to stop texting, dial their number and call them.

Again, this guide to social media etiquette is by no means complete. But it should give parents an idea of how to get started with social media and what’s acceptable and what’s not. So share it with your parents and help them get better at the world of social media. If you don’t, you might just find that embarrassing picture of you as a toddler all over the web.

What tips would you add?