For my last birthday, my wife gave me one of the best presents ever: a new tablet. No, I didn’t want an iPad; I wanted a Nexus 7, and that’s what she got me. Perhaps you’re thinking, “Why would you want anything other than an iPad?” My answer: the Nexus 7 is the tablet you’re really looking for. 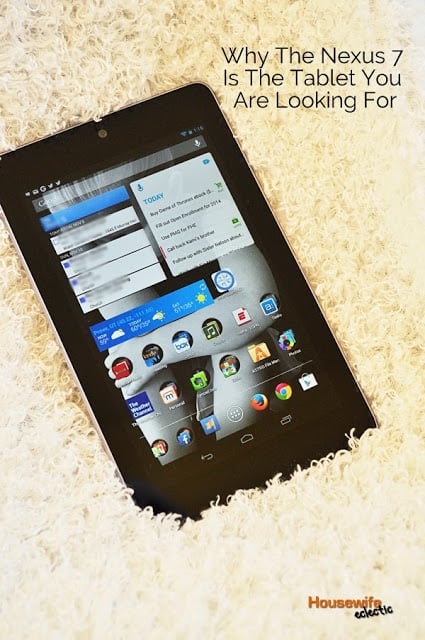 When I was a teacher, I was given an iPad2 to use for work and personal enjoyment. Over the course of the year I had it, I found myself increasingly annoyed by it. There were certain things that bothered me, like the weight, awkwardly large size and the lack of apps that really allowed me to work effectively. When the school asked for the tablet back, I wasn’t sad to lose it.
Now, don’t get me wrong. It’s not that I hate Apple, because I don’t. I have an iPhone and an iPod Touch that I love. I just didn’t like the iPad. It didn’t meet my needs. For a while, there weren’t really many other quality options, until Google released the Nexus 7. I did a lot of research and then took the leap of faith, and have never regretted it.
Recently, Google released a new version of the Nexus 7 that addresses the few issues I have with the version I own. So the product juts gets better and better. And since it’s Google’s flagship Android tablet, you can be fairly confident they will continue improving it.
So, without further ado, here is why the Nexus 7 is the tablet you’re really looking for:
Android. The iOS ecosystem (Apple) is nice, don’t get me wrong, but it’s very restrictive. You can only do what Apple wants you to do. Android is very open and customizable. Besides, the real power in mobile is in third-party cloud technologies anyway, so it doesn’t matter if everything isn’t in iCloud. This means if you currently use an iOS device, it’s really not that big of a jump to Android. The Android interface is similar enough to iOS that there isn’t a steep learning curve and if you’re a power use you will appreciate the extra ability to really customize your device.

Automatic updates of apps and the operating system. At first I was hesitant of both. Why? I was too tied into the Apple way of thinking where it was on me to take the time to update apps I had to wait cautiously with a new OS update for fear they didn’t have all the bugs worked out yet. Auto update on the Nexus 7 is slick and happens at night for me so I wake up with fresh app updates and am ready to get working instead of wasting time updating something the system can and should do for me.

The size. Many longtime iPad users worry the smaller screen won’t be enough for them. Not me. this was actually one of the big draws of the Nexus 7 for me. The iPad always felt too big and too delicate, like I was going to smash that pretty screen into a million pieces. The lightweight and smaller Nexus 7 is a more enjoyable tablet because of its size. You can easily hold it in one hand to read at night without your arm getting tired. And the 7″ screen is perfect for the distance you hold the device away from your body: your eyes can actually process everything on screen at once without having to pan around like on the iPad. Also, the Nexus 7 is very lightweight, which is a relief from the hefty weight of the iPad.

The physical design is just sexy. There are no buttons on the front face, just one solid screen of glass. There are only two buttons on the device, both located on the right side: power and volume. At first I was worried about not having a physical home button, but I appreciate the extra real estate given to the screen. Also, the digital home button rotates when you turn the device landscape so it’s easy to jump back home without worrying about where your physical home button is now. The padded back of the device is comforting, giving you extra assurance that you have a grip on your device. The whole product just looks sleek and attractive. 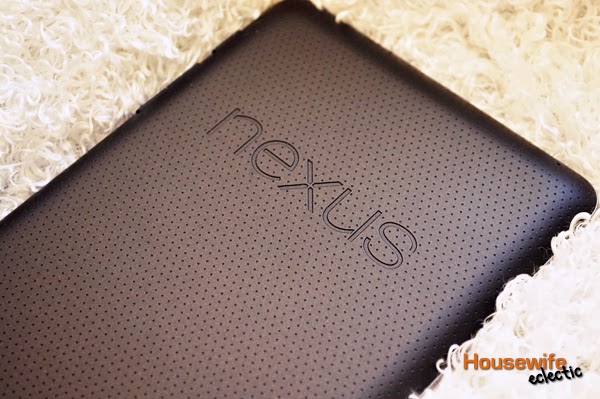 All your favorite apps are here. One of my biggest fears going into getting an Android tablet was whether or not it would have all the apps I wanted and was used to on the iOS system. I had heard Android had fewer apps. I’m here to tell you I haven’t had any problems. All the main apps people are fond of are there. You can use all your social media apps. You can still access Dropbox, Google Drive and Evernote. There are a slew of games. And, just like on iOS, there are plenty of free apps.

Swype. We all know typing on a mobile device is a hassle. Even with practice, most people still aren’t as fast or efficient as on a computer. With Swype, that gap is narrowed significantly. Swype is a system that allows a user to quickly drag their finger across all the letters in a word, and the Swype technology will figure out what word they’re trying to spell.
For instance, if I wanted to spell “computer,” I would hold my finger down on the c button on the keyboard and quickly slide my finger around to the “o-m-p-u-t-e-r,” and then lift my finger. The computer will do the work to figure out what I’ve written. It does a surprisingly good job and learns from you the more you do it. This is a HUGE time saver.
I went to a conference in New York a month ago and took all my notes on my Nexus 7 with no problem. I was taking notes faster than many of my colleagues who were on laptops. One of the best features of Swype is you don’t have to hit the space bar between words. Simply pause for a brief second and go on to the next word. In this way you can quickly write a sentence. In fact, I wrote the vast majority of this post on my Nexus 7 using the Swype technology. Once you use it, going back to an iOS device will feel clunky and slow.
The graphics are beautiful. The new 2013 Nexus 7 has mind-blowing graphics, making it the sharpest 7″ tablet on the market, but even the graphics on the original Nexus 7 are quite nice. Images come up crisp and clear and viewing images and video is a pleasure.
Widgets. While not a make-or-break feature, widgets make things easier. A widget is a little mini app that runs on the home screen next to apps. For instance, a weather widget would show you the current temperature, chance for rainfall and high and low for the day. You can get widgets for news, calendar, task lists and so many other things. They make the at-a-glance nature of mobile devices that much easier. 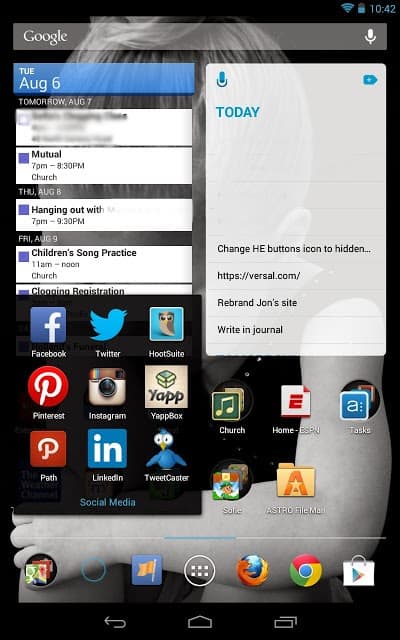 You can see your files! One of my biggest annoyances with iOS is how difficult it is to get files on and off the device. You have to go through iTunes for almost everything, which is a huge hassle. I hate syncing my device with the computer. Not so with the Nexus 7. In fact, I’ve never synced my tablet to a computer. I don’t need to. The Android operating system allows me to see all my files, just like I can on a computer. What’s more, I can organize my files into folders. If I plug my device into a computer, it reads it like an external hard drive and I can navigate to any of my files and easily transfer them. If you’re not a big file creator or control freak like me, this might not be a big deal, but I like having the option to control where my stuff goes.
Inter-app sharing. Another of my pet peeves with iOS is the lack of inter-app sharing. For instance, if I find something cool in a news app, I want to be able to share it in whatever app I want. On iOS, I am very limited in my sharing abilities. Unless the app specifically has built-in sharing features, I can at best share with Twitter or Facebook, and even then it’s very limited. On the Nexus 7 (and any Android), I can easily share content between apps. This makes my device so much more user friendly and allows me to do the social sharing I really want, without having to ask Apple’s permission, just for them to tell me no.
It plays well with others. The Nexus 7 works great with syncing content across devices. As I previously mentioned, I have an iPhone. I have no problem sharing content between the two devices with apps like Dropbox, Box, Google Drive and more. So many people are hesitant to go to an Android tablet because they use an iPhone. It’s really not a problem at all. Sure, it takes a bit more work to flow over your contacts, but since it’s a tablet and not really calling people, that’s not a super big deal, especially since your email account probably already has most of your contacts in there.
The Negatives
As you can probably tell, the Nexus 7 is one cool device. However, it does have some downsides too. For instance, the volume controls are weak. It doesn’t get very loud at all. That’s kind of frustrating if you want to use it to show a video to your friends. However, the new Nexus 7 boasts more powerful speakers. No rear-facing camera on the original Nexus 7. The original Nexus 7 only has a forward-facing camera so you can Skype or take selfies to your heart’s content. The new Nexus 7 includes a 5MP rear-facing camera. There are also few accessory options. You can get a case, keyboard and speakers for the device, but it can be difficult to find quality accessories.
Still, the positives far outweigh the negatives. The Nexus 7 is a fantastic tablet. It blows the Android tablet competition out of the water. And while it doesn’t get the hype the iPad or iPad Mini does, I am convinced it competes just as well, if not better. With it’s incredible price, quality construction and wide array of features, you really can’t beat the Nexus 7.
Tell us: would you consider buying a Nexus 7? Why or why not?