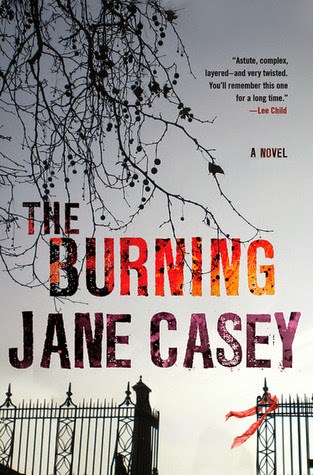 A serial killer is on the lose. He has already beaten four women beyond recognition before lighting the bodies on fire, earning him the nickname, The Burning Man. Detective Maeve Kerrigan is on the task force that is working to bring him to justice, when a fifth body, Rebecca Haworth, is discovered. As Kerrigan digs deeper into the fifth victim’s life she starts to realize that The Burning Man might not be responsible after all and a second killer is on the loose.

I wasn’t sure what I was expecting in this detective but I ended up liking Maeve Kerrigan a lot more than I thought I would. She is definitely a woman in a man’s world, fighting for her place on the task force by working hard.  Maeve is extremely likable as a character, and while the book moves slowly to end the conclusion, it doesn’t feel slow. I love that while she is smart and focused, she doesn’t seem omniscient. She is the narrator of the book as well as Louise, Rebecca’s best friend, to give more perspective into Rebecca’s life. A life that seems idyllic and wonderful on the outside, but under the surface is dark and desperate.

I loved that the book was two murder mysteries in one. You gained answers to all five murders as you learned the back story of one girl. Surprisingly enough, the murder’s confession at the very end of the book was the least compelling part of the entire story. It was plain and straightforward and completely unlike the rest of the book.

Overall, I enjoyed the first book in the Maeve Kerrigan series. It was my first experience with a British Procedural and I have to say I will be going back for more.