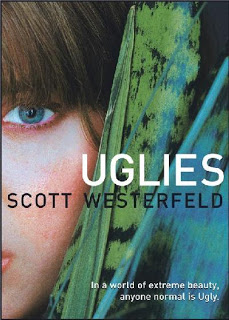 In Scott Westerfeld’s Uglies, Tally is a normal, insecure teenager. She hates everything about her average-looking face and often dreams of being pretty. What is different from Tally and the normal, insecure teenager is that when Tally turns 16, she will have surgery that will make her beautiful. Tally, like most of her friends, is ecstatic at the thought of being beautiful, because in her world, everyone is beautiful. When Tally meets her friend Shay, she starts to realize maybe being pretty, just like everyone else, isn’t what she wants.

Uglies is set in a distant future where people who live like we do – using gasoline cars and such – are called rusties and are looked upon as primitive. Tally’s world is full of wonders: hover boards, bungee-jump jackets and other amazing technological feats, however it is a world of extreme control where even thoughts are kept from becoming too advanced.

Tally is close to her 16th birthday and her “pretty” surgery, when she becomes friends with Shay. Shay doesn’t want to be pretty and she tries to convince Tally that she doesn’t want to become pretty either. There is a place called the Smoke, where people can runaway to escape the surgery. When Shay runs away, the authorities bring in Tally and tell her that unless she can lead the authorities to the Smoke and all the runaways, she will never be turned pretty. Tally is devastated, so she starts after her friend. She then must decide if her friendship is more important than being pretty and if she can deal with being normal/ugly forever.

This book is a fascinating study into what could happen if too much emphasis is put on beauty in an entire society. It is the first book in a series, followed by Pretties and Specials. One of the frustrating things is that this book does not stand on its own. The book stops before the story is completely told, so you will have to finish the series to get the entire story from Uglies.

I liked this book more than some of the men I know who have read it, mainly because I could understand where Tally was coming from in her insecurities. I could understand her desire to be with her friends, but not wanting to deviate from the social norm. I overall really liked this book. I think it may be the best one in this series and if you can get into a girly version of Sci-Fi, then this book is definitely for you.