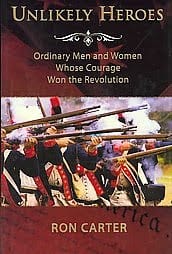 I am a major history nerd, especially when it comes to war stories. I read everything my high school’s library had on WWII and the Civil War but I really haven’t read much about the Revolutionary War. I think I have always been a little scared to read more about the revolutionary war because I have had a love affair with English history and I didn’t want to be forced to see the ugly sides of it.

Because of my love affair with English History, I think this book was a perfect read for me. It really opened my eyes about history. It made me feel that a country can be really great and have some not so great leaders. It also made me realize what makes a country great is how they pick themselves up when they fall. America has picked itself up so many times after so many wars and I believe that it has become stronger each time.

This book overall made me…. sad. Is that strange? Every time I read of people’s patriotism it made me sad that America doesn’t band together as much as they used to. I love America. I was the little kid that cried during the national anthem and sang ‘I am proud to be an American’ at the top of my lungs. I wanted to be a Navy medic for a lot of my childhood, until my life took a different turn. This book made me want to shout “Wake up America, can’t you see where all of the bickering is getting you?” at the top of my lungs to anybody who would listen. This book made me proud to be an American and made me want to remind others that they should be proud to be Americans too.

My favorite story in the book? I loved the one about the wife and her daughters that entertained the British army for as long as possible so that the Americans could get a head start. What an amazing woman, to come up with the idea, act on it quickly and complete what she knew she had to do so bravely. At a time in history where women didn’t usually get the chance to be war heroes, these women did everything they could to help America succeed.

There was one thing I didn’t like about this book. It was a bunch of short stories and so after each story, I felt like the book was concluded. Sometimes it took a lot of effort to read the next one because I was already fulfilled by the first one. It is still a good read if you can get your hands on it.