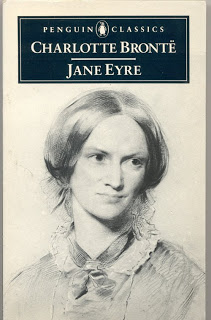 Bring out your stones. I am ready for it. I am about to admit something that goes against most of the female gender. I don’t like Jane Austen. I can’t get into Pride and Prejudice. I think Elizabeth Bennet may be strongly opinionated but is in no way a strong woman. I have never understood why everybody is so mad at Mr. Darcy. He did the same thing you or I would have done. He tried to protect a dear friend. Anyways, you may commence throwing your stones now but you might want to wait until I am finished.

I picked up Jane Eyre for the first time just a little while ago. I was reading it not for enjoyment but for the fact that it is a classic I have not read and I am trying to shorten that list. I felt bored before I even opened the cover. My boredom persisted for the first fifty pages or so until I realized that I was enjoying Jane Eyre. I wasn’t just enjoying it, I was loving it.

Jane Eyre is everything I wish Elizabeth Bennet was. Jane Eyre is gracious, opinionated but she is a strong person to her core. Jane is not beautiful. She never was. She doesn’t rely on it in any sense. She may have rich relations but she does not try to strike them to her advantage. She leaves for school. She doesn’t coast through school. She studies and hard. She becomes accomplished in many things. She doesn’t wait for someone to suggest she become a governess, she places the ad herself and then makes the necessary arrangements. Jane Eyre depends on no one but herself.

I think the thing that makes Jane Eyre immortal in my eyes is when she is at the brink of never having another care in the world, she shuns becoming somone’s mistress. Even when the man is the person she loves most in the world. Even though she has no relations that would be ashamed. She says she could not live with herself. She stands up to enormous pressure and leaves, destitute. She starts over.

I have heard Jane Eyre called the anti-feminist book. They call it anti-feminist because Jane Eyre falls in love with her much older, much richer master. That in order for Jane to consider herself happy she must be in love and married. I make the case for the opposite. Even when her love (Rochester) is offering her jewels and fine dresses, she turns them down and tells him she wants to provide her own way. She refuses elevating herself and becoming his mistress. She continues to take control of her own destiny and is not powerless.

Jane Eyre does not believe herself better than anyone. All she asks is to be able to work for what she wants. She works hard. Yes, she falls in love and wishes to marry which nowadays seems to automatically throw her into the category of being anti-feminism. What is so anti-feminist about a woman knowing what she wants and pursuing the same, even if that involves marriage and children. Sometimes I feel like feminism points of view are saying that women must work outside the home, not have children or love a good romance in order to be reaching their full potential, but what if that is not what I want? Telling a woman they have to do something one way or the other seems like anti-feminism to me.

Since I have now angered all of the Pride and Prejudice fans out there and all of the feminists, I will now close with this. Jane Eyre is an amazing book and character because she carries her own weight, she is strong in a time period where women are supposed to be weak. She is not easily offended and is not swayed by the idea that she may have to work every last day of her life to support herself. She knows what she wants and she works toward it, when it becomes unattainable she does not lay down and die but moves forward. She does not hate the idea of work and she does not hate the idea of marriage and children. She is open-minded and willing.