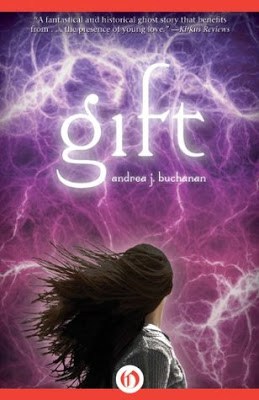 (I was given a copy of the book in exchange for my honest review. All opinions are my own.)
Daisy may go to an ordinary high school, but she is anything but ordinary. She has the ability to manipulate electronics of any kind. Unfortunately, this normally means frying them instead of something more useful. It has led her to live a chaotic life, moving from school to school after she creates problems and accidentally sets electronic fires. She is working to control her “gift” and fit it in her new school, but all of that changes when she befriends a fellow student who tries to commit suicide and starts have frighteningly real dreams about the murder of people who lived more than 100 years ago.

Gift by Andrea J.  Buchanan was a hard book for me to figure out. For most of the book it seemed like there were too completely separate story lines going on, one that centered on the main character’s abilities and the other that focused on the crazy life-like dreams she was having. The two story-lines didn’t come together until much later in the book. The jumps between the two were kind of confusing, but eventually the parts did become a whole.

I liked the characters, but the author left one of the most fascinating characters, Vivi, just off in the sidelines. I wish there had been a bit more about her. The oddest thing about this book was the sudden genre shift in the book. In the beginning I felt like I was reading a typical paranormal YA book and by the end it felt more like I was reading a thriller novel. I don’t typically read thriller type novels, so I wasn’t overly fond of the switch, but I felt like the author played it off well. It was creepy, without being overtly horrifying.

Overall, I did like this book, but I don’t think it is one I would ever read again. I recommend it to young teens that like a book that is fun and little bit scary.