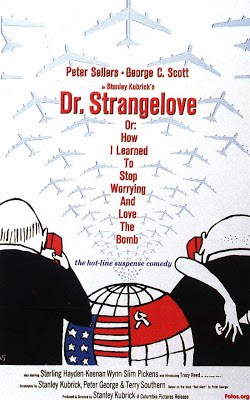 There were a few things I hated about my husband when I first met him: his love of football (which I now share), his best friend from high school (whom I now think is hilarious), but mostly his love of… Dr. Strangelove.

I walked in on the last five minutes of this movie while he was watching when we were dating. I came in just in time to see the entire world blow up. I rolled my eyes. What could be the point of such a stupid movie? He begged and begged me to watch the whole thing and since we were dating and I was still trying to impress him, I obliged. I couldn’t believe how stupid it was. I hated it, but then I did something ridiculous, I bought the movie. It involved a few more times of enduring the torture of this movie before I realized why it is number three on the AFI 100 years… 100 laughs list.

Dr Strangelove is the story of an insane Air Force base commander during the Cold War. He is convinced that Russia is trying to take over America through water floridation. This flouridation is contaminating everyone’s “precious bodily fluids” and must be stopped. In order to stop this contamination, he sends his nuclear bombers to bomb strategic targets within Russia. The story follows the insane commander as he tries to destroy the Russians and the efforts of the President of the USA to stop the bomb from being deployed. British Capatain Mandrake, a military transfer from the Royal Air Force in Britain, is stationed on the air base with the insane commander and tries to talk him down. Both Mandrake and President Muffley are played by Peter Sellers, as well as the Dr. Strangelove character.

Dr. Strangelove is a satire of the Cold War. The best thing about Dr. Strangelove is that it doesn’t seem like it is supposed to be a comedy. Most of the best scenes come from watching inept leaders try and work their way out of a world crisis.There is nothing funnier than a serious situation where emotional human flaws keep the people from being serious.

My favorite scenes come from watching Peters Sellers monologue as the President of the United States on the telephone to a drunk Russian Premier. This movie is also the movie that made many people think that there is a war room in which American leaders discuss acts of war. I think the best thing about Dr. Strangelove is that there is no happy ending. It sets up a situation and follows it through to the end. Almost every movie these days skirts around sad endings, trying to make life happy. Dr. Stranglove does no such thing. It shows us exactly what happens when people get the “If you are going to blow me up, I will blow you up too and at least we will both be dead” attitude. It is such a serious subject and it teaches a serious lesson, all while you are laughing.

Some of my favorite lines from the movie include:
“Gentlemen, you can’t fight in here this is the War Room!”

U.S. President to Russian Premeir:”Well, now, what happened is that, uh, one of our base commanders…he went a little funny in the head, you know, funny….and he went and did a silly thing….He ordered his planes to attack your country.”

“The deciding factor was when we learned that your country was working along similar lines, and we were afraid of a doomsday gap….Our source was the New York Times”

“Okay. I’m gonna get your money for ya. But if you don’t get the President of the United States on that phone, you know what’s gonna happen to you?….You’re gonna have to answer to the Coca-Cola company. “