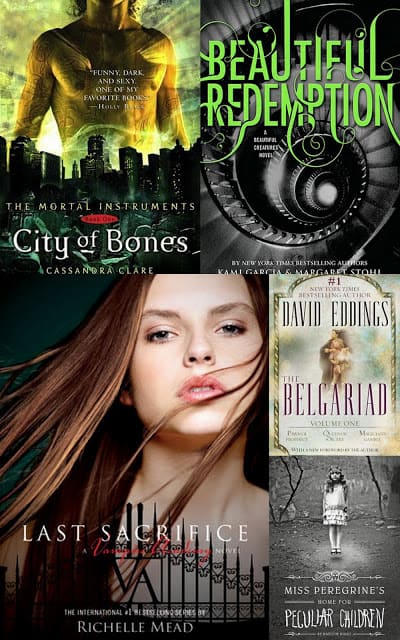 Sometimes in a book, even when you love the main characters, they aren’t who you remember the most. Sometimes a secondary character takes over and makes the whole book or series what it is. Here are some of my favorites. Linking up with The Broke and the Bookish.

1. Adrian from the Vampire Academy Series – Adrian seriously steals the show in this series. He is funny and engaging. As much as I loved the other characters, at time Adrian took over the story. He is just that fun to read about. I was thrilled that he is in the Bloodlines series as well.
2. Magnus Bane from The Mortal Instruments Series– The character that has taken on so much life of his own, that he now has his own short stories. I absolutely love this character, he is charming and over the top. I wish he was real, so we could be friends.
3. Amma from Beautiful Creatures– The more I found out about her, the more I wanted to know. I would love to read her back story. She is fascinating.
4. Polgara and Belgarath from The Belgariad– They are an important part of The Belgariad, but I was thrilled that each of them eventually got a book detailing their back story. If the present day in the series wasn’t so interesting, the bits and pieces you get of their stories in the Belgariad would steal the show.
5. The Other Children in Miss Peregrine’s Home for Peculiar Children– I found myself wanted to know more about each of the children’s abilities and where they came from. They were all so fascinating, I couldn’t help but wondering.

Who are some of your other favorite secondary characters?