Want to learn to play the piano? You can enter to win a set of DVD lessons here. 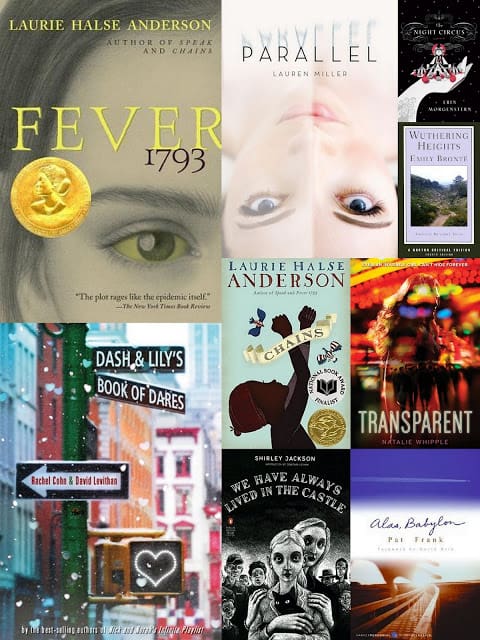 Anytime I finish a great book, I wish there had been a little more. Here are some of my favorite books that I wish had sequels. Linking up with The Broke and the Bookish.

Parallel– Honestly, this is a great stand alone book. One morning Abby Barnes wakes up and she is living in a parallel world where she is no longer a movie star, but a normal college girl. Every day she wakes up and her life is different. This story jumps around a lot, but it isn’t confusing. I am not sure how a sequel would work, I just really liked the book.

Dash and Lily’s Book of Dares– I absolutely adore Dash and Lily. I went to NYC right after I read this book, and I set myself on a Dash and Lily scavenger hunt, to see all the places from the book. Again, I am not sure how a sequel would work, I just love the first one so much.

Transparent– This is a book that I am honestly crossing my fingers for a sequel. This book is X-Men meets the Sopranos. The main character is completely invisible. An invisible girl, the daughter of a crime boss? Imagine the possibilities.

We Have Always Lived in the Castle– This is one of the books where I want a sequel or a good epilogue. I just want to know what happens next. A girl murders her whole family but gets off without punishment? Who wouldn’t want to know more?

The Night Circus– A magical competition that involves creating impossible and creative tents for a circus that is only open at night? This is one of my favorite books of all time. It is one of those books I would be kind of crushed if there ever was a sequel because it would ruin some of the magic, but I want more all the same.

Wuthering Heights– Life continues on. I would love to see how, but without the self centered characters of the first book, there would be no conflict for a second.

Alas, Babylon– A book about life in America after Nuclear War. I would love to see more about how America put itself back together again.

Fever 1793– About the Yellow Fever outbreak of 1793, I just love the time period, so I will always want a little more.

Chains/Forge– This series about two young slaves fighting for their freedom, set against the background of America trying to gain its freedom from Britain. It is beautiful story and I have been waiting for the third book, which keeps getting pushed back, for years.