One of the questions I get asked most often, is “How do I edit eyes to make them pop?” Now, I am not a big fan of alien eyes, eyes that are edited so much that all anybody can think about when they see the picture is how long those eyes took in Photoshop. You know what I am talking about, I could pull a million examples from  different friends Facebook pages, but since I want those people to stay  my friends, you are just going to have to use your imagination.

Here is a before and after look at a simple eye edit, to make the eyes stand out. I often use this edit when like in the photo below, the subject wears glasses, as an effort to make their eyes stand out from behind the rims. Obviously the after is on the left and the before is on the right. We starting losing light at the end of this shoot, which is why the image on the right is do dark, I will show you how I lighten images another time, now for the eyes. 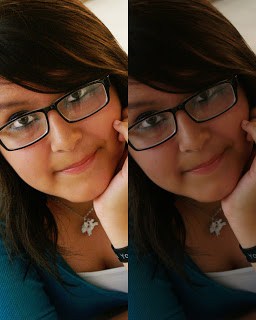 Open your photo in Photoshop and zoom in on the eyes. 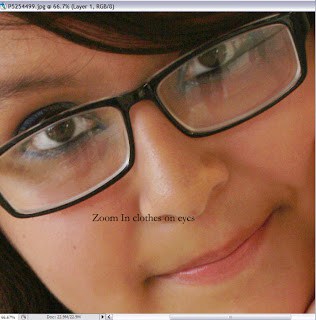 On your layers pallet, first create a new layer, then select the Soft Light option from the drop down menu. If you need to know how to do either of these things, the image below will show you. Don’t touch the opacity yet, but remember that it is there. 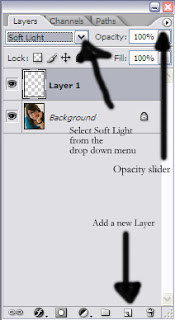 Make sure the boxes I have highlighted below have white and black in them, these are your default colors. You want white in the box on top first, this is opposite of what is shown in the image below. You can switch the colors simply by hitting the little set of arrows next to the boxes. Select the paint brush tool, if you look at the image below, you will see the paint brush tool is selected. 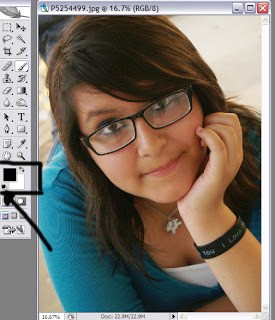 Set your opacity (this is a different opacity than the one I talked about before, this one is just for the brush you are going to be painting with), shown in the image below to about 30 percent. Then getting really close to the eye, with the white selected with your paint brush, paint over all of the white areas of the eyes. Painting with the white is going to lighten any area of the eye that you touch, sometimes it looks nice to lighten the colored part of the eye too, but it depends on the eye. Don’t be afraid to experiment. Then select the black and paint over the pupil. Painting with black will make everything darker. The thing that makes eyes pop is the contrast between the different areas, so you want the whites white and the pupil black. 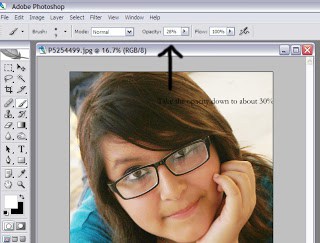 Sometimes I will turn my color to a bright red and my opacity down to about 9 percent and paint over the tear duct, to make it just a tad pinker. Remember when I said not to touch the opacity on the layer yet? Well if the eyes look a little too alien to you, now is when you want to take that opacity down a little bit. It will take some of the harshness out of the painting. When you are satisfied with your eyes, go to the Layer menu at the top of the screen and selected Flatten Image from the choices. Your image can now be saved as a JPG. 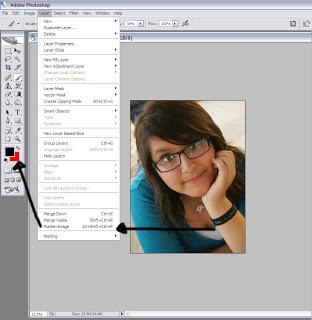 Now you can make your eyes pop, even alien if it you want, but if you are about to go with alien eyes, just ask yourself, “Will this still look classy in 10 years?”