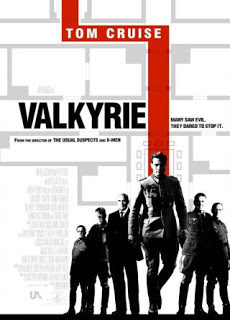 How utterly and completely depressing. Watching Valkyrie is kind of like watching Titanic. Since the movie is based on a historical incident you already know what happens. The ship sinks and nobody assassinated Hitler.

As for the movie itself, it was done well. The movie is based on war and so yes, it is violent and bloody. It was fascinated to see a group of people band together to save their country. I bet there were many Germans who loved this movie. Germany has been trying to make the distinction for years that not all Germans were Nazis and not all Nazis were German. This movie really shows that not everybody believed in the cause that Hitler was fighting for.

The movie was so frustrating in parts because it really showed the human spirit. You know, the side of all of us that wants to do the right thing and still cover your butt? There were so many chances to over throw the regime and to many people were scared and covered themselves instead of taking the chance for a better life.

It is worth a watch but probably only once. If you watch it more than that you might find yourself permanently depressed.

A point of clarification – I actually really liked Valkyrie but it is a movie that I am not sure I will watch again. Ever since I had Sofie I can’t do execution type scenes. They make me completely nauseous. I blame it on the scene from the dark knight where Two Face is going to kill the little boy, after I saw that when I was pregnant I can’t do scenes like that anymore. So to make myself a little more clear. The movie was really good but really depressing, the actors did a fine job.