This review of Speak by Laurie Halse Anderson may contain some spoilers. Also know that Speak contains some sensitive subject material which may be briefly mentioned in this review. This is strictly of review of the book, not the movie which I have not seen. 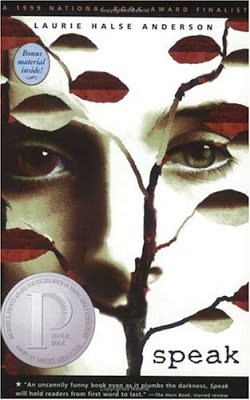 “THE FIRST TEN LIES THEY TELL YOU IN HIGH SCHOOL
1. We are here to help you.
2. You will have time to get to your class before the bell rings.
3. The dress code will be enforced.
4. No smoking is allowed on school grounds.
5. Our football team will win the championship this year.
6. We expect more of you here.
7. Guidance counselors are always available to listen.
8. Your schedule was created with you in mind.
9. Your locker combination is private.
10. These will be the years you look back on fondly.”
Speak is a book of pain, suffering and healing. Melissa, the main character and narrator, is a freshman in high school, who has became on outcast before the school year even starts. It is hinted at that she used to have many friends until a party at the end of the summer, a party at which Melissa calls the cops and gets many of the kids busted. Calling the cops on the kids at the party turns Melissa into a social pariah, she is alone with nobody to turn to. With nobody to tell the real reason why she called the cops, Melissa becomes silent.
Melissa becomes increasingly depressed and begins to fail all her classes. All of her classes but art, which she uses to express her frustration, sadness and shame.
Although what really happened at the end of summer party is not revealed until the end of the book, you understand something has happened. Something drastic to change her whole personality around so quickly. Normally in fiction, when I come across a teenage character that is particularly filled with angst I put down the book. Not so with this book. From the very beginning of this story there is clearly some underlying trauma. Something happened to break her and now we are watching as she puts herself back together. We aren’t watching angst that comes from having to take out the garbage. Rather, this is angst that comes from having life as you know it ripped away from you.
Speak is well written. It is mostly an inner monologue, with very little dialogue and development of other characters. We see the world from inside Melissa, inside her trauma. It is, in some aspects, kind of disturbing because of the heavy subject matter. Being written from the perspective of a teenager I believe it is easy for young adults to relate to. It is important subject matter, even if it is not comfortable.
I really liked this book. It was funny in parts and easy to relate to. I understood her lack of enthusiasm for high school and the descriptions of the cliches at school was right on the money. Even though I really liked this book, it is not one I would read again and again. As important as I feel it is, it is kind of dark, a read that makes you serious and brings you down a bit, even as it uplifts you.
I highly recommend this book, with some caution. It is dramatic. It can be intense, but it is important.