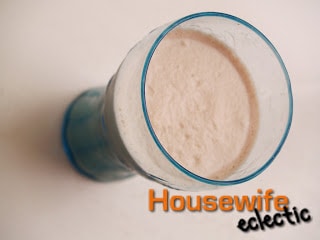 Malts are something my husband grew up on. I had my first one after we were married. I used to come up with excuses for my sister-in-law to come over and then all of the ingredients would ‘magically’ appear on the table and I would tell her that it would be shame for her to not make them. After we moved out of state a while later, we had to learn to make them for ourselves, except I still try to get my husband to make them. For some reason, treats always taste better when I didn’t have to put in all the work. 🙂

You will need:
1 large cup of milk
5 heaping tsp. malt
5 heaping tsp chocolate powder
Lots of ice cream (The way my father-in-law puts the amount is, “more ice cream than you think you could possibly need.)

Blend and serve in cups. This amount made enough for my husband and I both to have a cupful and a small cup for our daughter with some left over.
What kinds of treats did you grow up on?