Today is the last day to enter the apron giveaway!
Six years ago today, I married my husband. There was snow on the ground. Just what I wanted. It was beautiful. Today I have been reflecting on the six years we have been married. They have been hard at times and just generally wonderful. 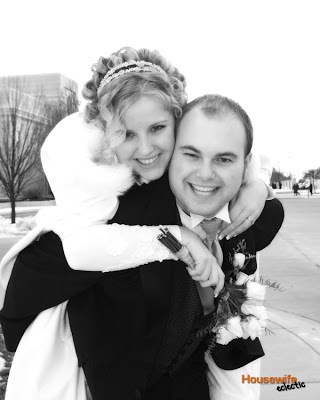 The best way to describe my husband is a closed book. He doesn’t tell very many people his true feelings and usually lets other people do the talking in any given situation. Even when he does talk, he hardly gives information about himself. The other day at his parents house, his mom offered him some caramel popcorn. I was surprised because I know how much he hates caramel popcorn. He has spent the last almost 30 years eating caramel popcorn because he thought it was rude to tell people he didn’t like it. It is just the way he is.
Shortly after we were married, I was talking about the fact that my husband is pretty closed off with a coworker. I was frustrated that I didn’t know how he felt about something that seemed important at the time. By the time I was finished talking I was so furious that I marched right home and yelled at my new flabbergasted husband. At the end of my angry speech I said something to the fact that I wished he would just tell me how he felt about me. His response was simple. “Don’t you pay attention? I show you everyday.” 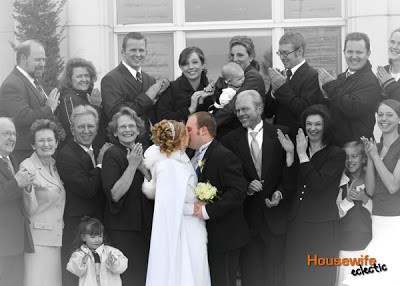 I have thought a lot about it since that night and now I can see his love for me everywhere. It’s in the fact that our third bedroom is my craft room instead of an office. It is in the way he will make dinner when some nights I just don’t want to. It’s in our library, a beautiful reading room in what should be a dinning room. It’s in the fact that he moved 16 boxes of books across the country for me, without complaining because he knows how important they are to me. He did complain about the boxes of fabric. He draws the line at fabric. 😉
His love is in my blog and it’s design. He spends all day coding and designing web pages at work and then will come home and still do it for me. It is in the way he read Jane Eyre, just because it is my favorite book. It is in the way he watches Jane Austen adaptations, Doctor Who and Jane Eyre with me, even though they make him want to beat his head against the wall. 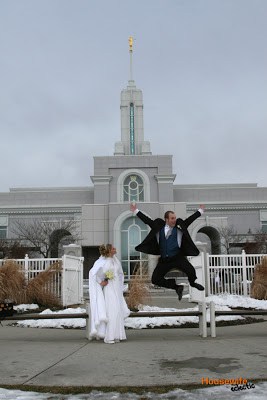 My last semester of collage, I was pregnant, taking 21 credit hours and working full time. Every time someone learns how crazy my last semester of collage was, they ask how I did it. The answer is easy. My wonderful husband. I don’t think I cooked a meal or washed a dish that entire time. He even took three of my classes with me, so he could go and take notes for me if I needed to rest. He was nothing short of miraculous.
A little less the two years ago, I came away from the most devastating doctor’s appointment of my life. I was told to expect to be bedridden for the rest of my life. That eventually dressing myself would be an accomplishment. I felt like I had ruined my husband’s life. Doomed him to taking care of me. Luckily the doctor was wrong, but I will still never forget what my husband said in those dark days. “It doesn’t matter to me if you are healthy or sick. I love you forever. Don’t worry we’ll figure it out.”
I am so lucky. Lucky to have a husband that spends hours building elaborate Lego houses with our four-year-old. Lucky that he knows how to cook like a gourmet chef.  Lucky that he is a talented musician and often plays just to play, filling our house with music. Lucky that he can write beautiful music and has written me my own song to cheer me up when life is hard.
In words, he is still pretty much a closed book, but over the years I have learned to stay still and watch. In watching his sweet, caring ways with me and our little girl, I have learned more about him than words could ever have expressed. I have learned just how amazing he is. I have seen the quiet acts of kindness for people who never know who helped them. I have seen him stay late to help a coworker finish a  project. I have seen him bless the lives of everybody around him.
When we were married 6 years ago, I knew I was marrying a good man. I didn’t realize at the time I was marrying a great one.