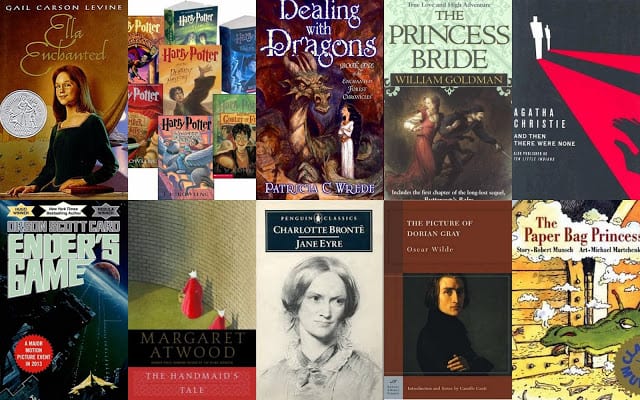 I started blogging five years ago. Five. It seems like a lifetime ago. I can’t specifically remember anything I read 5 years ago, but thanks to trusty Goodreads, I was able to find some loved titles from long ago. Linking up with The Broke and the Bookish.

1. Ella Enchanted– I know I’m an adult and this book is written for preteens but I absolutely LOVE it. I think it will be on my favorite list for a long time coming. In this Cinderella retelling Ella is under a curse from a fairy that makes her compelled to be obedient. In a land of ogres, fairies and trolls, Ella must learn how to break the curse or she could be the cause of her own destruction. I love the characters in this book, this take on Cinderella is definitely a favorite.

2. Dealing with Dragons– This was a childhood favorite that has turned into adult favorite. Cimorene is a princess who doesn’t want to dance, sew and flirt, so she runs away to become the princess for a dragon instead. This is another book where I love the characters, it is definitely written for a middle school audience but I find myself still enjoying years later.

3. Harry Potter– Do I even need to state why this is a top ten? I first found this series when only the first three books were published. I waited in lines at midnight for each of the following books and had them read by the next morning. When Harry Potter and the Deathly Hallows was released on my birthday, it was pretty much the best birthday present I have ever been given.

4. The Princess Bride– We all know the movie has a huge following, but have you ever read the book? I was surprised to find out how similar the book and movie are and they are both so delightful.

5. And Then There Were None– I was OBSESSED with Agatha Christie books a few years ago. I may have an entire shelf devoted to them in my library. This book is my second favorite thing she has ever written. I am really good at figuring out who the killer is before the end of a book, except with this one. I had no idea until the very last page. Which means this book has won a place on my favorites list.

6. Ender’s Game– Kids training in battle school to fight an intergalactic war? My husband fought with me for years to read this book and when I finally did, I couldn’t put it down. I am so excited for the movie later this year.

7. The Handmaid’s Tale– This book is not for faint of heart, a graphic telling of American gone dystopian, this book is captivating and gripping. I often hear it described as the female version of 1984.

8. The Picture of Dorian Gray– I own two copies of this book because my original copy has been read so often it is held together with rubber bands. There is something so incredible about this telling of a beautiful man who is full of evil. I read this book for the first time when I was 12 and have reread it at least once a year since. There is something about the depth of the soul that always brings me back to this book. (side note: I do NOT recommend this book for the average 12-year-old)

9. The Paper Bag Princess– I know this is a picture book but it might be the best princess story ever written. Period.

10. Jane Eyre– I have loved this book since I read it for a class more than 10 years ago. A while ago my husband and I decided to trade favorite books to read, this is what I gave him and he actually didn’t mind it. It is actually the ONLY British movie I can pop in the DVD player without him leaving the room. I call that a major win.

On a random note, I have decided I despise movie tie-in covers on books, don’t you?