Have you entered the giveaway for a 1-hour free massage in Utah AND the Giveaway for a Cricut Expression and DSLR camera or KitchenAid? 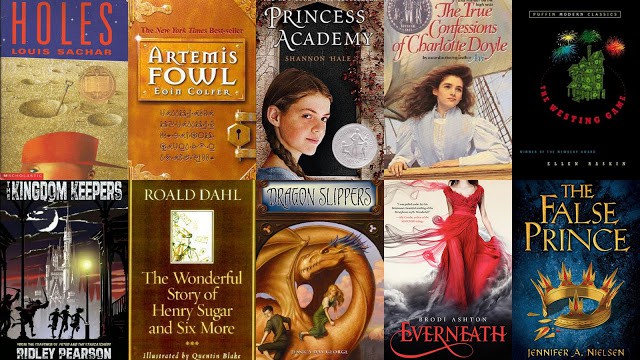 Sometimes when I read a book, I just want something easy that I don’t have to think too much about. A book that is perfect for a lazy day at the pool. These 10 books are some of my favorite light reads, a lot of them are middle school reads, some of which read as a child, but most of which I found as an adult. Linking up with The Broke and the Bookish.

1. Artemis Fowl – Underneath the the world of humans lies a whole secret world of Faeries, a world that 12-year-old billionaire and criminal mastermind, Artemis Fowl, discovers and exploits in hopes of gaining fairy gold. The Artemis Fowl books are a light, fun and easy read and they get better as the series goes on. They are targeted at a younger audience maybe for 10-12 years, but I still enjoy them.

2. Holes – After Stanley Yelnats is falsely arrested for stealing a pair of famous shoes, he is sent to Camp Green Lake where the warden has kids dig holes each day, it seems the warden is looking for something. Could it involve the legend of Kissing Kate Barlow? Holes is a classic, I didn’t read this book until I was an adult, and I loved it. My husband was glancing over my shoulder when I pulled up Holes on Goodreads and he asked “Who could rate Holes less than four stars?”

3. Princess Academy – Miri has grown up on Mount Eskel, it is a quiet life until the King’s Priests chose the mountain as the home of the next princess. Each village girl is required to attend a strict princess academy, for when the prince comes in a year to pick his bride. I love the story line of Princess Academy. It is a easy and quick read.

4. The True Confessions of Charlotte Doyle – Charlotte’s family has moved from England to Rhode Island, leaving Charlotte behind to finish the school year. Charlotte boards a ship for an ordinary ocean crossing when she realizes that she has walked straight into a mutiny. I loved this book as a child and I still love it as an adult. It may not be completely historically accurate but it is a completely fun read.

5. The Westing Game – Mr. Westing, a millionaire, has died. He has left his vast fortune to 16 different people, if they can figure out the elaborate game he has set up. This fun read is also for young readers that I discovered as an adult. It is a light and fun mystery.

6. Disney After Dark – When Finn, Charlene, Willa, Maybeck and Philby agree to become the models for the new Disney World hologram projections, they have no idea that the will become part of the park. After the sun goes down, the park comes to life and all of the villains from every Disney ride come alive and these five teens are the only things standing between the villains and park domination. If you love Disney, you will love these fun books with all of your favorite villains.

7.  The Wonderful Story of Henry Sugar – In this story of a modern day  Robin Hood, Henry Sugar figures out how to teach himself to see through playing cards, a skill he uses in casinos around the world. This book is actually more of a short story, it is ones of my husband’s favorite from his childhood.

8. Dragon Slippers – Creel’s aunt wants to sacrifice her to a dragon in hopes that a rich knight will rescue her and marry her, but Creel has other plans. She talks her way out of the dragon’s clutches and leaves for the city to make her own way. This book is one of my favorite girly reads, it is a quick read and fun.

9. Everneath – When Nikki leaves the world for the Everneath, she just wants the pain to go away when she returns 6 months later, she is giving 6 months with her old life until she is sucked back into the underworld forever. This modern day take of Persephone is a fun, quick read.

10. The False Prince – In a kingdom on the brink of war, one nobleman tries to stave off the inevitable by training orphan boys to be like the younger prince who has been missing for years. One boy will get to be king and the rest will lose their lives to keep the plot a secret. I thought this book was pretty slow in the beginning but when it got going, it really did. I am excited to read the sequel.