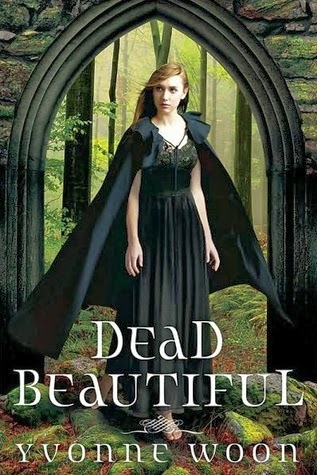 Normally a paranormal teen book set in a high school is enough to turn me off to the entire book forever. I feel like it has been done and done again and I am sick of reading about it, I think Dead Beautiful was an exception. It is Renee Winters sixteenth birthday and she is coming back from the beach with her best friend, she convinces her to take a different road home and everything changes when she finds her dad’s car abandoned by the side of the road, her parents murdered.
After her parents death, Renee is sent across the country to a boarding school, Gottfried Academy, in remote Maine, where instead of English and Math classes, she finds herself in philosophy and Latin. There she meets the mysterious Dante, who she can’t help feeling drawn to, even though there is something unearthly about him.
There were some moments in this book that I was having Twilight flash backs. The cold skin, the deadly attraction to someone who didn’t seem entirely human, but unlike Twilight, there are no vampires or insta-relationships. This relationship builds slower and at a believable teenage pace. Dead Beautiful is definitely paranormal, but it also had it moments where it felt like a horror story was building. I liked that dimension that horror added to the story, filling out moments that could have fallen flat, but not so scary I was wondering why I was reading it at night.
I loved that I couldn’t quite guess where the story as going and the twist at the end made me want to pick up the next book in the series for sure. Dead Beautiful didn’t land on my list of favorite books, but as a Paranormal YA read, it was pretty darn good.