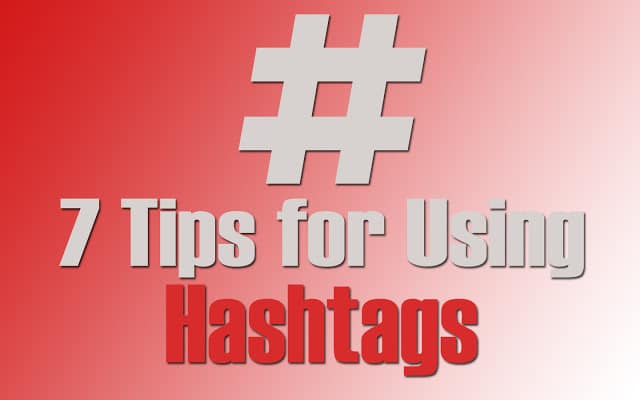 When we were in school, we endured hours of grammar and punctuation lessons, which most of us promptly forgot and never used, opting instead to remember the lyrics to Michael Jackson songs. Still, most of us can function and write a semi-coherent sentence.

Then social media came along and changed the rules to everything. Each social media platform has its own rules – some spoken and some unspoken. Yet, there’s no schooling on this. We are expected to learn the rules as we go along. That’s part of the fun and organic nature of social media. However there are some social media conventions that have been around long enough that everyone should know. And at the top of that list is the almighty hashtag.

For those of you still confused about what this mysterious hashtag actually is, it is the # sign followed by any combination of letters, usually forming a word. Example: #healthy.

Hashtags are used as a tool to group together related conversations on social networks. For instance, let’s say you post a Tweet about a healthy recipe you found. To help other people on Twitter know this is a healthy recipe, you would tag #healthy anywhere in the Tweet. Your Tweet is now part of a large, world-wide conversation about other things people have added the hashtag #healthy to.

Ultimately, the hashtag is a way for the social media platform to easily and quickly group similar conversations together. It simplifies the search results process by assuming similar hashtags are related. So, what you think of as a trendy feature is really little more than a way to speed up and simplify the social network’s internal processes. Sorry to be such a killjoy.

Hashtags became popular early on with Twitter, though it wasn’t the first to use them. And hashtags make perfect sense on Twitter, where the point is for users to share interesting content from around the web and from opinion leaders. Since then, many other social networks have latched on to the concept, including Google+, Instagram, Pinterest, Tumblr and soon Facebook.

Despite how prolific hashtags have become, appropriate use of hashtags is still little understood. To help clarify, here are seven tips for using hashtags.

1. Hashtags are public and searchable. This means you should think about what you’re posting and what you’re tagging before you do it. If your post is meant just for friends, a hashtag really defeats that purpose because now everyone can see it. Maybe you do want the whole world to see your post so you can increase your exposure, especially if you’re posting from your blog social media accounts. The point is, think before you tag.

2. Anything can be a hashtag. There’s no giant registry of hashtags. Anything following a # can be a hashtag. But, just because anything can be a hashtag, doesn’t mean it should. When writing a hashtag, think if other people would tag similarly or would even be interested in it. A good way to check is to go to Twitter and type your hashtag into the search bar. This will pull up all relevant results. Then you can see the type of conversations you’ll be getting into. Maybe it’s exactly right, or maybe you should choose a better hashtag.

3. Keep hashtags short. The best hashtags are short, specific and memorable: #probiotics. #funny. One world hashtags are the best. Because hashtags cannot contain spaces, many people are tempted to lump nearly a full sentence together. This is difficult to remember, share and process. Whenever I see long hashtags, it takes my brain a few seconds to decode what it’s even talking about.

4. Limit the number of hashtags in a post. Twitter tends to limit this by its short nature, but even here this is frequently violated. Typically, it’s in poor form to post more than two or three hashtags per post. Remember, the point of a hashtag is to add to a conversation, not to spam a bunch of conversations.

5. Add hashtags in the logical flow of a sentence. Let’s go back to my healthy recipe idea earlier. My post could say, “Check out this delicious #healthy pasta dish I found. Only 240 calories.” By putting the hashtag in  place of a word, I kill two birds with one stone and make it easier to read. Lumping a bunch of hashtags at the end of a post is confusing and looks a lot more like spam than a creative and relevant post.

6. Hashtags should NOT be used to be cutesy or make a point. This is probably the number one most violated rule of hashtags and I see it all the time, especially on Instagram. People will post things like #ohmygoshcutestbabyever. First of all, it took me five minutes to figure out what that actually said. Secondly, what are the odds other people are going to search for that? And even if they did, are you actually contributing something useful to that conversation? However, it may be appropriate to put something like #fail or #win in a post to make a point, as long as you feel your post can contribute to those conversations.

7. Not every post necessarily needs a hashtag. Many people feel unless they have hashtags in every post, they aren’t doing social media correctly. If there’s not a logical place for a hashtag, don’t try to force one. How do you know if there’s a logical place for it? A good test is to get into the habit of adding hashtags as you type the sentence. If nothing comes to mind as you type, chances are your post may not need one after all. And that’s OK.

As social media evolves, so will the hashtag, but these are good tips to follow that will make your content more interesting and relevant. There are also other great uses for hashtags in social media campaigns, but that’s a topic for another post. Until then, #seeya.