In the beginning was Facebook. OK, really it was MySpace, but can we just forget about that ugly episode? Everyone was happy and had a great social network to share meaningless updates and go around poking people. Then along came a little bird named Twitter, giving people the chance to tweet shorter versions of meaningless updates.

Fast forward a few years. Today, Twitter is more than just “that other” social network; it’s holding a huge market share of the social media world and gaining new accounts every day. Yet, by and large, Twitter is misunderstood. Almost every day I hear someone tell me they don’t understand Twitter. So, today’s post is designed to help you navigate the world of Twitter. 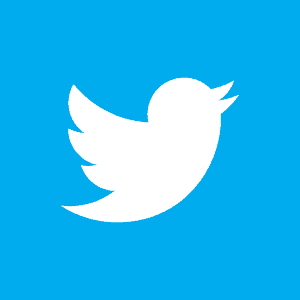 First of all, you need an account. When you set up your account, you will have to create a username. That seems basic enough, but it’s more important on Twitter than just about anywhere else. It’s how you are known to other Twitter users and becomes part of your Twitter handle (we’ll get to that term later). So make sure you choose something memorable and specific to you, and remember that people will be seeing it, so don’t choose something embarrassing.

Before we get any further, let’s get some vocabulary down, as this is one of the toughest parts of Twitter.

The layout of Twitter is a little big overwhelming and confusing at first, so let’s break it down. At the top of each page is the menubar. 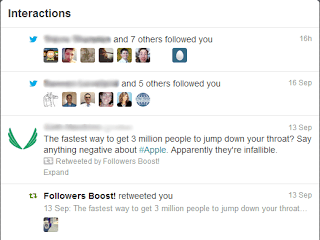 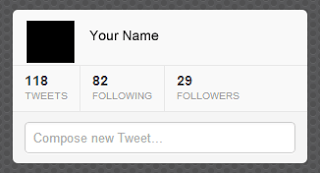 On the left side of the page are some quick-view options. The first one is information about you. At a glance, you can see how many tweets you’ve composed, how many people you are following, and how many people are following you. You can also compose a tweet directly from here by typing in the field that says, “Compose new Tweet…”
The field will expand so you can type more. In the bottom-right corner you will see how many characters you have remaining. One of the most challenging things for new users is learning how to condense ideas in 140 characters or less. In the bottom-left corner you see icons to attach an image and to identify location. 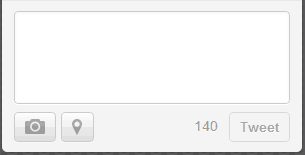 When you attach a photo, it doesn’t automatically appear with the tweet, like it does on a Facebook post. Instead, it adds a link, taking up some of your 140 characters. So, you have to plan around that when you add a picture. When someone clicks on the link in your tweet, they will see your picture.

When you press the Blue Quill button in the top-right corner of the menubar at the top of the page, you get a similar tweet composition box. It doesn’t matter which method you choose to compose a tweet.
Underneath the tweet field is a box giving you suggestions of people to follow. Sometimes they’re interesting and you want to follow them (do this by pressing the Follow link under their name). Other times they’re not useful. You can also click Browse categories and Find friends to find more people to follow. 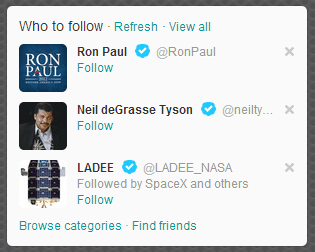 A quick word about following. Just because you follow someone does not necessarily mean they will follow you back. This is especially true of celebrities. They have so many people following them that they just don’t have time to follow you back. Why should you bother following people anyway? If you don’t, Twitter will be a boring place. When you follow someone, their tweets appear in your feed timeline, giving you a never-ending supply of things to read.

Trends are a really fun part of Twitter. You can see what’s currently trending in the Trends box. Click on any trend and you will see a feed of all the tweets that are talking about it. Join in on the fun. I’ve found many new people to follow by doing this and have also been followed by others.

When you look through your Twitter timeline feed, you mostly just scan through the tweets really quickly. If you hover over a tweet, you’ll see options to reply, retweet and favorite.

And there you have it. That’s Twitter. But, wait, it can’t be that simple can it? Well, yes. Twitter is designed to be simple. It just seems complicated at first.

What Do I Do With Twitter?
You do three things:

What Do I Tweet About?
Whatever you want. Twitter first started as people just posting about what they were doing. Today, people use Twitter to post interesting thoughts, news stories, and ideas.
How Do I Get Lots of Followers?
There’s no one way to do this, but there are a few things that can help:
Don’t get too discouraged if you don’t rack up a slew of followers. There are a small number of users with a large number of followers and they make up the vast majority of the tweets on Twitter.

How do I use a hashtag?
Place a # before any word to make it a hashtag. Choose your hashtags wisely. Try to limit yourself to about two hashtags per tweet. Any more than that is overkill and makes you look desperate.

How do I know what to hashtag?
That’s hard to say. A good way to determine this is to write out your tweet without any hashtags. Read over it and see what the best keywords are in that tweet. Add a # in front of those words, and you’ve created a hashtag. You can also look at what others are using as a hashtag and ride the wave.

When should I retweet something?
A retweet is a tribute to someone. Retweet when you feel something is interesting and/or you want your followers to see it too. What you retweet is as much a reflection of who you are as what you personally tweet, so be careful about what you retweet.

When should I reply?
Reply when you have something interesting to add to a tweet.

When should I use Direct Message?
Really, you shouldn’t. Unless this is the only method you have to contact a person and it has to be a private message, find some other way to contact them.

If you have any other questions, feel free to ask, either in the comments or follow me on Twitter @nxtitan.