Ever wanted to visit a ghost town? Then stop on over to Google+. At least, that’s how the now cliche joke goes. But, have you taken the time to really check out Google+? If not, you’re missing out on one of social networking’s greatest hot spots.

Google+ was the highly anticipated social network platform that was launched just over a year ago and was projected to be the Facebook killer. While it has gained more users faster than any other social network, it is no Facebook killer and still by and large misunderstood and underused.

But wait, surely that has to mean there’s something wrong with it, right? Wrong. Google+ is by far the most rich social network experience available and the reason it’s not being used is because of what I call the Apple Effect.

The Apple Effect refers to Apple’s strangehold on the portable media and tablet markets. There are scores of other products out there, many of which do the same things and in some cases better, but because Apple was there first and is big and flashy, they win.

In the world of social media, Facebook has the Apple Effect. It has been around longer and really moved the social networking experience mainstream. Many of us have “grown up” with Facebook as it evolved from one form to another. So, when a new service, like Google+, comes along, we put up our defensive shields and wonder if we need another social network.

My answer is yes, yes you do. Here’s why.

Google+ is the most content-rich social networking experience available. I find myself spending more time on Google+ than I do on Facebook in a day because there are more interesting things on there. That being said, there are some key differences between Facebook, Twitter and Google+.

Facebook is really only good for one thing: stalking your friends. Be honest, what do you go on Facebook to do? Stalk. Maybe play a few games. Post status updates about how life is so hard, etc. That’s it. So basically it’s high school digitized. When you think of it that way, it’s a wonder any of us do it, and yet we’re all addicted. I’m guilty too. I find myself going on Facebook multiple times a day to see what my friends are up to. Twitter is used to stalk famous people saying really weird things in short tweets.

If Facebook is like high school online, Google+ is the college experience. You’re moving away from the comfortable experience of everything you’ve known and get to carve out a new niche for yourself. You discover new things and new people you didn’t even know were out there. Oh, and you have the time of your life.

Let’s look at some of the features of Google+ and why you should use this great social network.

If you haven’t already signed up for a Google+ account, it’s a piece of cake. If you have an existing Gmail or Google account, you just have to click on the little icon in the top-left corner that says your name with a + sign. This takes you to Google+. Setting up Google+ is similar to any other social networking account, including adding info about yourself and your likes, etc. I don’t want to get bogged down in that.

Once you’re signed up, you need to find your friends. Since Google+ is a Google service, it will scour your Gmail address book to find friends that are already on Google+ and gives you the chance to invite others to join as well. So let’s say you find 30 of your friends on Google+. Now it’s time to organize them into circles. This is similar to the categories on Facebook (close friends, best friends, family, etc), but Facebook stole that idea from Google+ and it works so much better in Google+.

At the top of the page, you will have a list of your friends. At the bottom of the page are little circles. You can create as many of these circles as you want. Then you drag a friend into a circle and they now belong to that circle. The purpose of a circle is to have a group that you can easily and specifically share certain things with. For instance, I have a lot of extended family that are friends with me on Facebook, but I don’t necessarily want to share certain things with them, so I want to only share it with relevant people. That’s what a circle does. When you post a status update or share something, you can select which circles you want to share it with. Facebook does this too, but it’s more of a pain than it’s worth. With Google+ it’s a piece of cake.

OK, so now you’ve got your Circles done. Let’s jump to the main page of Google+, also called your Home page. It looks like this. 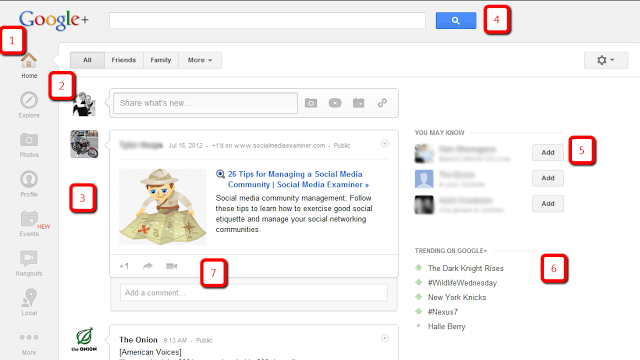 We’ll refer back to this image frequently to explore each part.

1. Navigation Panel
Along the left edge of the page are all your navigation options. The Home page, which you see above, is also called the Stream. It shows what’s happening, similar to the Facebook News Feed. I’ll get into each of the little options in this panel in next week’s post.

2. Status update
Similar to Facebook, you post whatever you want here. However, it’s much easier to post on Google+ than on Facebook. You can see the little icons to the right which give you the options of adding pictures, videos, events and links. 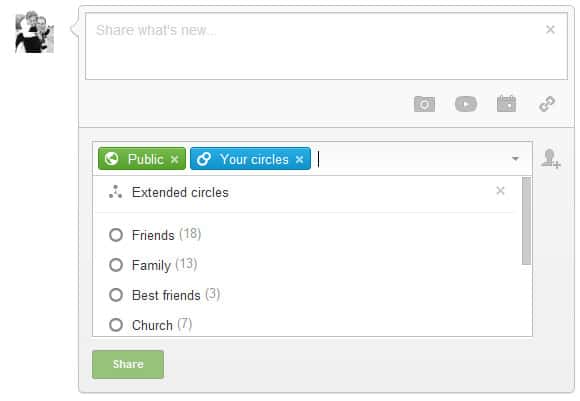 You type your status update as normal. Then you choose who to share it with. This is where your circles come in handy. By default, my post included Public and my circles. Public really means public and will pull up in Google search results. Maybe that’s what you want, maybe it’s not. You may be thinking, “Who on earth would want their stuff public?” Google+ is really powered by that public feature. One of the greatest honors on Google+ is to have something you post become hot and shown to other people. Now, if you’re posting about your child’s first steps, that’s probably not a good public event, but if you come across a funny meme you want to share then why not make it public? Remember, Google+ is the college experience of social networks. Share and make new friends.

Let’s say you don’t want it to go Public and you only want to share your post with a few of your circles. Simply click the little X next to the existing Public option and then select which circles you want. Easy as that.

3. The Stream
The stream will show you posts from people in your circles and people/organizations you are following. Like I said before, not many of my friends post on Google+, so my stream is mostly dominated by things shared from people and organizations I follow, such as The Onion, Food Network (you have no idea how delicious everything they share looks) and some of my favorite bands. Because Google+ allows for easier sharing of content and more of it, things shared from my followed groups are really enjoyable to read. On Facebook, I find myself skipping over these things, almost treating them like junk posts. But on Google+, that’s the whole reason I come.

4. Search
Come on, it’s Google, you have to have a search bar. You can search for anything here and Google+ will pull up all relevant posts on the topic and suggest people for you to follow. This is kind of like the Discover feature on Twitter but SO much easier to use. It’s a great way to really get involved with what other people are saying out there and to make new friends. Again, think college parties.

5. People You May Know
Google+ wants you to find your friends, so they suggest people for you to add. If you do know them and want to add them, simply click the add button and then a pop-up will appear that will let you add them to whatever circle you want.

6. Trending on Google+
Because Google is so powerful, it can monitor what topics are popular and trending at any given time. They post these for you so you can jump in on the conversation by clicking on the trending link. 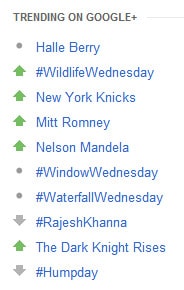 The up arrows mean the topic is becoming more popular, the bullets mean it is staying the same and the down arrows mean it’s losing popularity. The fun with these topics is because they are popular you get to see the ridiculous things people are saying about them.

7. Sharing options
Google+ is a social network and is thus centered around sharing. There are different ways you can get involved with things others post.

The +1 is similar to the Like button on Facebook. It’s just a quick acknowledgement that you appreciate a post. Your +1s are not tracked though, so you can’t go back and see everything you’ve given a +1 to.

The arrow is for sharing. This means you will re-share whatever is in the current post along with whatever comments you have. The purpose of sharing is to give your take on something to people in your circles. Let’s say you found something funny on a page you follow. Chances are friends in your circles may not be following that, so they will never see it unless you share it with them.

The video icon is to start a hangout about that topic. We’ll discuss hangouts next week, but basically a hangout is a video chat with multiple people.

So, after going through the basic uses of Google+, hopefully you’re feeling a little more comfortable with it and will give it a try. If you’re thinking, “OK, I get it, but why is it so cool?” then just wait until next week when I really dive into all the amazing Google+ features.